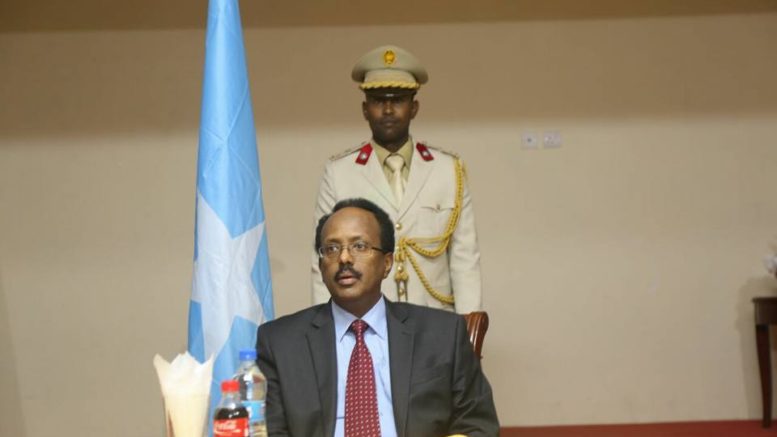 AU Special Representative congratulates H.E Mohamed Abdullahi Mohammed Farmajo upon his election as President of the Federal Republic of Somalia

Mogadishu, February 8th 2017– The Special Representative of the Chairperson of the African Union Commission (SRCC) for Somalia, Ambassador Francisco Caetano Madeira congratulates H.E. Mohamed Abdullahi Mohammed Farmajo upon his election today as the President of the Federal Republic of Somalia. Ambassador Madeira also extends his congratulations to the government and people of Somalia for the successful completion of the electoral process, which culminated in the election of the new President.

“The last couple of months, leading to this momentous day, have no doubt been challenging for Somalia in its effort to bring peace and stability. The electoral process journey was intricate, requiring negotiations and compromises to overcome the challenges that once appeared insurmountable. On behalf of the Chairperson of the African Union Commission, I congratulate you all for making this historical moment a reality,” Ambassador Madeira stated.

The AU Special Representative also appeals to the president-elect and all leaders to work together in uniting the country by pursuing reconciliation to enable Somalia tackle the political and socio-economic challenges affecting the country.

“I appeal to the new government that will be formed, to use the next four years in office, to enhance reconciliation and unity. The African Union remains committed to supporting you in your efforts to stabilise the country,” Ambassador Madeira added.

He further commends the Somali National Security Forces and AMISOM for their commitment and hard work which provided an environment suitable for the successful completion of the electoral process.

Be the first to comment on "AU Special Representative congratulates H.E Mohamed Abdullahi Mohammed Farmajo upon his election as President of the Federal Republic of Somalia"