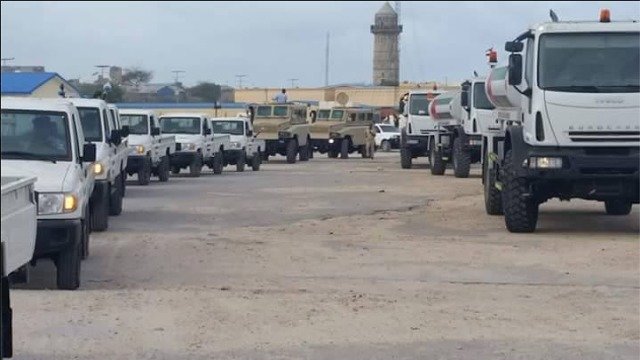 The UAE government in January submitted a formal application seeking permission from the “Somaliland Administration” to open a military base in the port town of Berbera.

Somaliland is part of the Federal Republic of Somalia and do not have the authority both constitutionally and logically to agree the establishment of a military base within the Somali territory.

We therefore call The Somali President H.E Mohamed Abdullahi Farmajo , The UN Special Representative of the Secretary-General for Somalia Michael Keating to interfere and prevent the establishment of this illegal military.

The United Arab Emirates has donated military equipment to Somaliland Police force. The equipment includes armoured vehicles, traffic police motorbikes, jeep vehicles and water tankers, This is ILLEGAL action of arming a federal state within Somalia without the permission of the central government.

This donation is also an act of bribery to make sure the Somali land administration to agree to the establishment of the military base.

Any state selling or donating arms to Somalia has to show that there are strict measures in place to make sure the weapons will not be used by paramilitary militias to flagrantly violate rights. If they haven’t done that, no transfer should take place.

Since the UAE donated to Somaliland , the administration has involved in several clashes with local militia in the Khatumo state region of Somalia and Puntland.

We also urge The prime minister of the United Arab Emirates (UAE), and Emir of Dubai Mohammed bin Rashid Al Maktoum to stop intruding the Somali territory without the Permission of the FEDERAL REPUBLIC OF SOMALIA.

This petition will be delivered to: