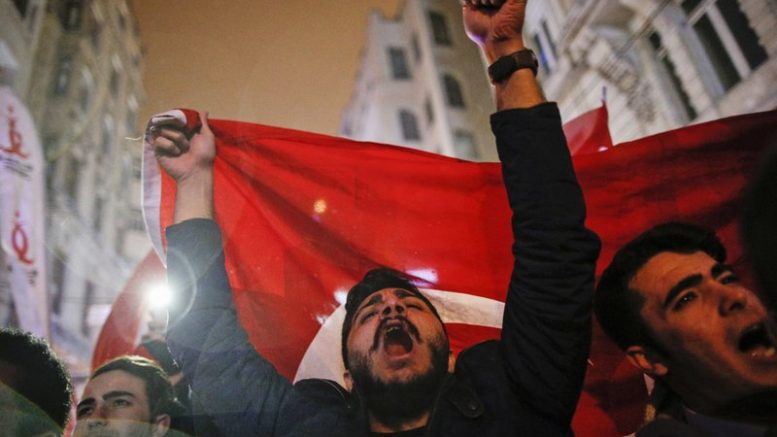 A man has climbed onto the roof of the Dutch consulate in Istanbul and replaced the Netherlands’ flag with the Turkish one.

Television footage shows a man standing on the roof of the building shouting Allahu Akbar, Arabic for “God is great.”

A small group of men holding Turkish flags are seen outside the consulate shouting “Damn Holland” and “Racist Holland.”

The incident occurred Sunday morning amid escalating tensions between the two NATO allies after the Netherlands barred two Turkish ministers for campaigning for an upcoming referendum on Saturday.

Private Dogan news agency reports the consulate later took down Turkey’s flag and put the Dutch flag back up.

The man is still unidentified.

Police in Rotterdam say they arrested 12 protesters as a demonstration outside the Turkish consulate devolved into rioting.

Police spokeswoman Patricia Wessels said the arrests were made for violence and public order offenses as Dutch-Turkish protesters pelted police with bottles and rocks early Sunday.

Police responded with batons and a water cannon.

Wessels says seven people were injured in the brief explosion of violence, including a police officer who suffered a broken hand.

The confrontation came at the end of a long standoff in which Dutch authorities refused to allow Turkish Family and Social Policies Minister Fatma Betul Sayan Kaya into her country’s consulate in downtown Rotterdam.

A small number of protesters reacted angrily when they heard that Dutch police were driving the minister to the German border.

Dutch Prime Minister Mark Rutte says he was forced to keep two Turkish ministers from traveling within the Netherlands and to bar them from campaigning among Turkish voters because Ankara had threatened sanctions against his government.

Rutte said Sunday, “We can never do business under this kind of blackmail.”

The prime minister says he was shocked to see one of the ministers try to get to a Rotterdam rally by car after the government had made clear she was not welcome.

Turkey’s minister of family affairs was escorted back to the German border after a long standoff outside the Turkish consulate in Rotterdam.

Earlier, the Dutch government had withdrawn the landing rights of the plane carrying Turkey’s foreign minister.

The ministers planned to urge Turkish expatriates to back the referendum, which would expand the president’s powers.

Be the first to comment on "The Latest on Dutch-Turkish tensions: Man climbs to roof of Dutch consulate in Istanbul, takes down Dutch flag"