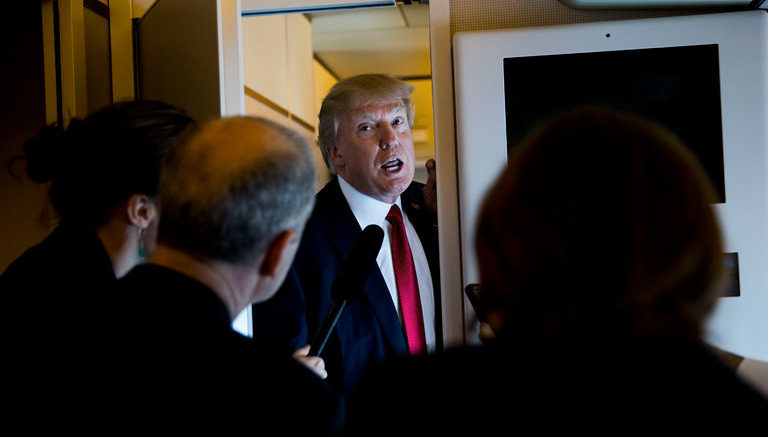 In times of crisis, credibility is an American president’s most valuable currency. It’s one thing for a foreign partner to doubt a president’s judgment; it’s entirely more debilitating when that partner doubts the president’s word.

As President Trump confronts the twin challenges of North Korea and Syria, he must overcome a credibility gap of his own making. His insistence on remaining the most prominent consumer and purveyor of fake news and conspiracy theories is not only corrosive of our democracy — it’s dangerous to our national security. Every fact-averse tweet devalues his credibility at home and around the world. This matters more than ever when misinformation is a weapon of choice for our most dangerous adversaries.

Part of the problem is that Mr. Trump’s itchy Twitter finger can’t resist bluster. A series of sophomoric presidential missives — “North Korea is behaving very badly”; “North Korea is looking for trouble”; if China won’t help, “we will solve the problem without them! U.S.A.”; North Korea’s quest for a nuclear-tipped ICBM “won’t happen!” — has given Pyongyang a rare chance to take the high road. “Trump is always making provocations with his aggressive words,” its vice foreign minister declared.

Presidential bravado also risks North Korea taking him at his word, and miscalculating accordingly. Loose threats of pre-emptive military attacks could cause its leader, Kim Jong-un, to shoot first and worry about the consequences later — perhaps striking South Korea with conventional weapons to remind the world what he is capable of, if the United States seeks to eliminate his nuclear program. That’s a quick path to conflict with a volatile and nuclear-armed adversary.

Equally problematic is Mr. Trump’s challenged relationship with veracity, documented almost daily by independent fact-checking organizations. The greatest hits include his repeatedly debunked claim that former President Obama tapped his phones, that a nonexistent terrorist attack occurred in Sweden, that Germany owes NATO vast sums of money, that Mr. Obama released more than 100 detainees from Guantánamo who returned to the battlefield and that Democrats made up allegations about Russian efforts to influence our election. Mr. Trump’s canards risk undermining his ability to counter propaganda from our adversaries.

The president was rightly applauded for striking back smartly against the Assad regime in Syria for its use of chemical weapons. But his response incited an information war in which President Bashar al-Assad and his Russian enablers have sought to escape blame for the atrocity.

Their tactics have ranged from advancing alternative scenarios — for example, alleging it was American warplanes that bombed a terrorist warehouse full of sarin gas — to asserting that the evidence proffered by the United States was fabricated. We don’t know where “those dead children were killed,” Mr. Assad asserted, adding, “Were they dead at all?”

Mr. Putin is a master at this game, throwing out falsehoods to confuse casual consumers of the news while creating a phony equivalence between Western governments and media, and his own. An army of bots and trolls and RT, the Kremlin’s international propaganda network, carry his false flags around the world. In this way, every source of information is suspect, and there is no objective truth.

During the crisis caused by Russia’s military aggression against Ukraine in 2014, I worked with colleagues in the Obama administration to convince people in other countries that Russian troops were indeed in the eastern Ukrainian region of Donbass, that Moscow was arming and directing the separatists, and that it was the separatists, using a missile launcher driven in from Russia, that shot down a Malaysian passenger airliner, killing all onboard.

We spent hours negotiating with the intelligence community about what information we could declassify, marshaling open-source evidence and working on fact-based presentations for our allies and the media.

Mr. Putin’s propaganda campaigns made our job tougher than expected. But we had one trump card that usually carried the day: President Obama’s credibility. Foreign leaders trusted his word, even when they disagreed with his policies.

President John F. Kennedy demonstrated the value of presidential credibility at the height of the Cuban missile crisis, when he sent emissaries to America’s allies in October 1962 to secure support for the quarantine of Cuba. He designated Dean Acheson, the former secretary of state, to deal with Washington’s prickliest partner — President Charles de Gaulle of France.

When Acheson offered to show de Gaulle spy plane imagery to back up the claim that the Soviet Union had deployed nuclear missiles 90 miles from American shores, de Gaulle threw up his hands and said he needed no such evidence. “The word of the president of the United States is good enough for me.”

If Mr. Trump continues to spread his own misinformation on matters large and small, he will cede that advantage and America will be seen like any other country — which is just what our adversaries want. This will complicate his administration’s ability to rally others against threats to our national security.

Every country has a founding mythology. For Americans, it starts with our first president’s youthful encounter with a cherry tree and refusal to tell a lie.

Mr. Trump would do well to find inspiration in that story, which goes to the heart of what makes America different — and our foreign policy effective — around the world.