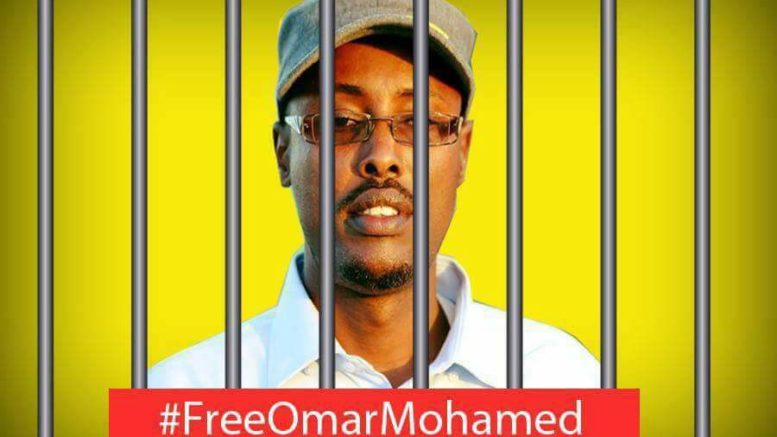 Mogadishu: Monday 07/08/2017
NUSOJ condemns the arbitrary arrest of a journalist in Garowe.
The National Union of Somali Journalists (NUSOJ) condemns – in the strongest terms possible – the arbitrary and detention of a Somali journalist on late Sunday, 6 August, 2017 in Garowe, Puntland.
The reason behind the arrest of the editor of Horseed media in Puntland Omar Said Mohamed isn’t yet clear but Puntland authority seems to be furious about some of the news stories he recently wrote to his website including an interview with a local MP who criticized to the government finance institutions for the involvement of corruption.
NUSOJ is concerned about the ongoing arrest of the journalist without due process and asks Puntland leaders to release the detained journalist unconditionally. Mr Omar is now arrested at a police checkpoint in southern road of Garowe town which is the same place that was detained a journalist Ahmed Ali Kilwa in the first week of July 2017.

Press freedom is a critical issue in some Somali regional states, where journalists are often harassed, jailed and intimidated ” said Mohamed Ibrahim Moalimu, NUSOJ Secretary General. “We call for the immediate and unconditional release of Omar Said Mohamed as his detention is totally against freedom of expression and media,” Moalimu added.
“NUSOJ is condemning the arrest of Omar and we call upon Puntland authority to freedom of expression and media guaranteed and enshrined by our constitution and we reiterate Puntland leaders to respect the laws of the country and abandon oppression acts and harassment of journalists” Mahir Jama Aden, NUSOJ President said.

NUSOJ finally joins its affiliate MAP of condemning the arrest of the journalist and request for his immediate release.