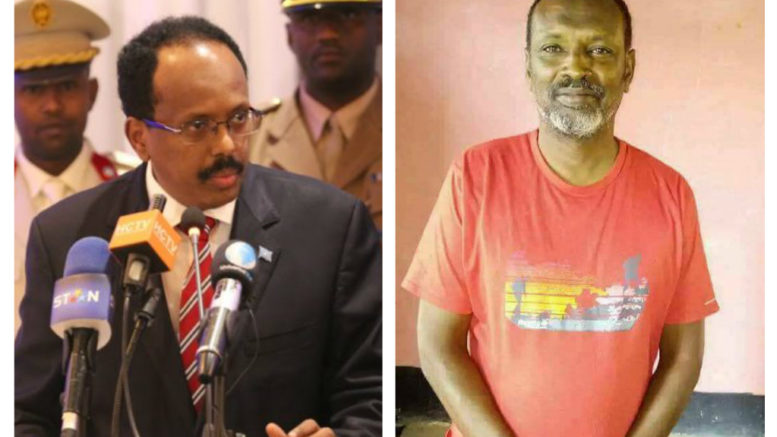 By handing ONLF officer Abdikarim Sheikh Muse to Ethiopia, the Somali government has betrayed its own people.

All betrayals are not made equal. In recent weeks, a political disaster of epic proportions has befallen upon Somalia. The Somali government has committed what many – including some of its staunchest supporters – consider a treasonous act.

Somalia’s National Intelligence and Security Agency (NISA) has extradited a Somali citizen, a highly decorated military officer, a war hero who was wounded in the 1977 war against Ethiopia and an officer of the Ogaden National Liberation Front (ONLF) to Ethiopia without any due process.

Initially, the government denied and dismissed all information related to the illegal rendition as “vicious rumours intended to undermine government’s credibility”; claiming their objective is “Qaran dumis” or to destroy the nation.

Once the truth hit the streets that Abdikarim Sheikh Muse (Qalbi-Dhagax) was handed over by his brethren to a brutal regime with a long record of human rights violations, it unleashed a collective public fury the likes of which Somalia had never seen. The public space became saturated with songs, poems, and skits expressing extreme disillusionment on a popular president – Mohamed Abdullahi Farmajo – who only a few months earlier was celebrated as the long-awaited saviour of the nation.

Desperate to shake off this scandal, Prime Minister Hassan Ali Khaire convened a Council of Ministers emergency meeting. To the utter dismay of many who were still hopeful that their government will do what is right, the Council of Ministers made the problem even worse. They accused Qalbi-Dhagax of being a terrorist who “committed serious crimes in Somalia” and who “was in cahoots with al-Shabab to further sabotage the nation”. Furthermore, they declared ONLF, which is an internationally recognised liberation movement that has offices throughout the West, Middle East and Africa, a terrorist organisation.

To understand the foreign-dominated, self-refuelling system that propels the Somali political process one should think of an aircraft carrier with a massive flight deck where the Somali president is granted the discretion to walk, march or even run to any direction he wishes as that will neither alter the carrier’s course nor its destination.

While irredentism or Somalia’s historical struggle to reclaim all five parts of its nation as partitioned by the “colonial masters” is, for all intents and purposes, dead; the loyalty, the commitment to advocate for the rights of all Somalis in the region to live freely and off the chains of oppression is alive and well. It is in that spirit of solidarity that Somalis of all walks of life support the ONLF cause and the group’s right to work towards liberating their homeland.

Let us hypothetically assume that all allegations against Qalbi-Dhagax were true and that he was a ruthless “terrorist” who carried out clandestine operations to sabotage Somalia and has killed and committed rape as the cabinet (no judge or jury) has declared, how do such allegations justify his rendition to Ethiopia? Why would the government not prosecute him in Somalia?

If he is guilty of these serious crimes, why he was living in Mogadishu for years as an ONLF officer without ever being arrested? Qalbi-Dhagax was not an anonymous figure. He was not in hiding. Clearly, the cabinet’s decision to hand him over to Ethiopia is not a well-thought-out one.

If the cabinet does not withdraw the politically motivated charges directed at Qalbi-Dhagax and implant them into the law instead, anyone who supports him or the ONLF either verbally, in writing, by marching or even by simply rejecting the charges government directed at them could get charged with “aiding and abetting” terrorism and subsequently could be renditioned to Ethiopia.

To understand the foreign-dominated, self-refuelling system that propels the Somali political process one should think of an aircraft carrier with a massive flight deck where the Somali president is granted the discretion to walk, march or even run to any direction he wishes as that will neither alter the carrier’s course nor its destination.

For over a decade, the same strategy has been used to lure each Somali president into a glorified failure. I call it the “3F seduction”: False security, false esteem, and false authority. That is to say, while he, the president, in on the deck of the aforementioned aircraft carrier, he can dress for the part and quixotically claim to be in charge. Meanwhile, the system continues its course.

The Qalbi-Dhagax case is not only good for Ethiopia, it is good for all other failed institutions: UNSOM, AMISOM, other clandestine operatives and economic predators who perpetuate the status quo in Somalia -the overtly most-aggressive beneficiaries being the UAE and Erik Prince of Blackwater port management partnership.

Can Farmajo be rescued?

Most of those who knew the new president (this author included) were confident that he would prove himself the right catalyst for a genuine Somali-led reconciliation process and revitalise Somalia’s decaying sense of nationhood. Unlike his predecessors, President Farmajo came in with a certain level of experience and a significant political capital and public trust.

He knew any substantive reform would have to be instituted and implemented within the first year. He was not to waste time or to squander opportunities. The expectation was to reclaim Somalia by pushing for the establishment of an Independent Reconciliation Commission, made of credible citizens of good character with no political affiliation or ambition; by pressuring the Parliament to establish a constitutional court; by establishing an Anti-Corruption Commission composed of trustworthy patriotic citizens; by creating a Somali military counterintelligence branch that keeps track of all foreign militaries, paramilitaries and mercenaries in the country and their activities; and by reaching out to Somaliland.

Back in February, I described the newly Parliament-elected president as “a champion of enlightened patriotism that is optimistic and relies on itself to restore the corroded dignity of a self-destructive nation”. Two weeks later, after he appointed a man who was an employee and part-owner of Soma Oil and Gas as prime minister, I saw the writing on the wall but opted to give one last chance to the new president.

Seven months of dazzle have only proven that President Farmajo and his team have mastered how to seduce public sentiments – mainly overenthusiastic youth – with glittering generalities such as justice, peace, and accountability, without any specifics. It is common to hear President Farmajo make assertions such as: “Ours is a government of the people. We are accountable to the people.” But, when the masses were outraged by the government’s decision and demanded answers, the president of the people sought refuge in silence. He is yet to make a single statement regarding the Qalbi-Dhagax fiasco. Farmajo seems to have plunged into that old too familiar cesspool of presidential betrayals. He has succumbed to a system that was designed to perpetuate failure and keep Somalia where it is or worse. And in doing so, he has written his legacy in the pages of infamy by becoming the first ever president to commit betrayal of such magnitude against the Somali people.

At this point, aside from divine intervention, the only remaining conceivable game-changer is the Somali Parliament. The speaker of the parliament has appointed a committee to review this grave matter. The Somali people are now waiting to see whether its representatives are going to do the right thing.