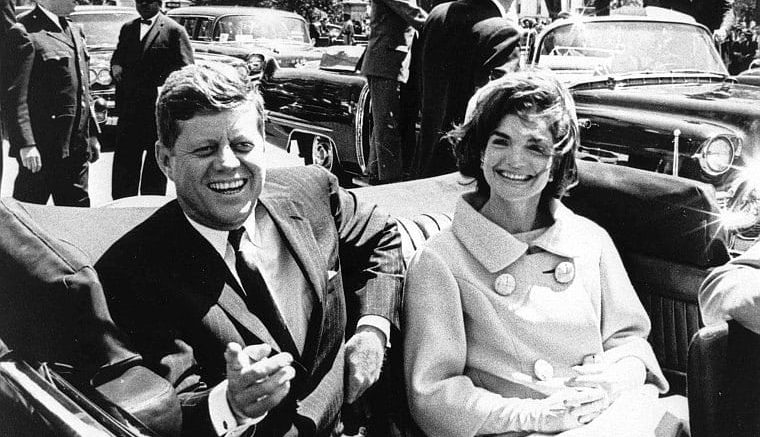 0
SHARES
ShareTweet
The US government has released 2,800 previously classified files related to the assassination of President John F Kennedy in November 1963.
As readers, historians and journalists comb through the thousands of pages of documents, here is what we have found so far.
FBI warned Dallas police of threat to kill Oswald
The FBI warned Dallas police of a death threat to Lee Harvey Oswald, according to a memo by director J Edgar Hoover, but the police failed to protect him.
“Last night we received a call in our Dallas office from a man talking in a calm voice and saying he was a member of a committee organized to kill Oswald,” Hoover wrote on 24 November 1963.
“We at once notified the chief of police and he assured us Oswald would be given sufficient protection. This morning we called the chief of police again warning of the possibility of some effort against Oswald and again he assured us adequate protection would be given.
“However, this was not done.”
Read the document.
USSR worried ‘irresponsible’ US could launch a missile
Soviet Union leaders considered Oswald a “neurotic maniac who was disloyal to his own country and everything else”, according to an FBI memo documenting reactions in the USSR to the assassination.
The Soviet officials feared a conspiracy was behind the death of Kennedy, perhaps organised by a rightwing coup or JFK’s successor Lyndon Johnson.
They also feared a war in the aftermath of Kennedy’s death:
Our source further stated that Soviet officials were fearful that without leadership, some irresponsible general in the United States might launch a missile at the Soviet Union.
Read the document.
Cuba reacted with ‘happy delight’
Cuban leader Fidel Castro told American lawmakers his country was not involved in the plot, when House investigators visited the island in 1978.
In 1963, however, the Cuban ambassador to the US reacted with “happy delight” to the murder, according to a CIA memo.
Read the document.
Oswald spoke to ‘member of KGB assassination unit’
According to an intercepted phone call in Mexico City, Oswald was at the Soviet embassy there on 28 September 1963 and spoke with the consul, Valeriy Vladimirovich Kostikov. Oswald later called the embassy on 1 October, identifying himself by name and speaking broken Russian, asking the guard who answered the phone whether there was “anything new concerning the telegram to Washington.”
The CIA memo calls Kostikov “an identified KGB officer” and a member of Department 13, a unit “responsible for sabotage and assassination”.
Read the document.
Timeline
JFK’s assassination
Show
Officers looking for Oswald before assassination
The Dallas division of the FBI was trying to track Oswald in October 1963, according to memos by the New Orleans division of the bureau.
An agent there wrote that Oswald was of interest according to “Cuban sources”, and that he had forwarded the information to Dallas authorities. “That office is presently conducting inquiries to locate Lee Harvey Oswald,” the memo said.
Read the document.
Jack Ruby had ‘good in’ with Dallas police
Oswald’s killer “had a B-girl operation where drinks were pushed heavily with no interference from the police department”, according to an FBI informant in a memo dated days after Ruby shot the suspect dead.
But the informant was surprised Ruby had “actually killed Oswald” rather than simply wounding him “in the leg with a .22 caliber weapon in order to get publicity”.
Read the document.
FBI concerned about conspiracy theories from start
In his 24 November memo, Hoover had already started to fear conspiracy theorising. “The thing I am concerned about,” Hoover said, “is having something issued so that we can convince the public that Oswald is the real assassin.”
Read the document.
CIA assassination plots abound
The documents include details of various CIA attempts to assassinate foreign leaders, most frequently Castro.
JFK files: British paper got anonymous call just before assassination
Read more
According to a 1975 “summary of facts”, the CIA also considered killing Congolese leader Patrice Lumumba and Indonesian president Sukarno.
Receipts and financial accounts for clandenstine projects also show tens of thousands of dollars paid out for anti-communist activities, supplies, and weapons, directed at Cuba, others in the Dominican Republic, Congo, and north and south Vietnam.
Read the document.
A British local newspaper was ‘warned in advance’
A reporter on the UK’s Cambridge Evening News received an anonymous call telling him to ring the US embassy for some big news, 25 minutes before the assassination of JFK, according to a memo from a deputy director of the CIA to the director of the FBI.
“The caller said only that the Cambridge News reporter should call the American embassy in London for some big news and then hung up. After the word of the president’s death was received the reporter informed the Cambridge police of the anonymous call and the police informed MI5.
“The important point is that the call was made according to MI5 calculations, about 25 minutes before the president was shot.”
Read the document.
We don’t yet have all documents
President Donald Trump blocked the release of an unknown number of documents, saying he had “no choice” but to bow to national security concerns of the FBI and CIA. He also ordered them to review their still secret documents over the next 180 days, setting a new deadline of 26 April 2018.
We’d like your help too. The JFK files have been published online here. If you’re reading through the documents and you spot an interesting fact or snippet you think we’ve missed, it would be great if you could let us know. We’ve set up a form here for contributions.