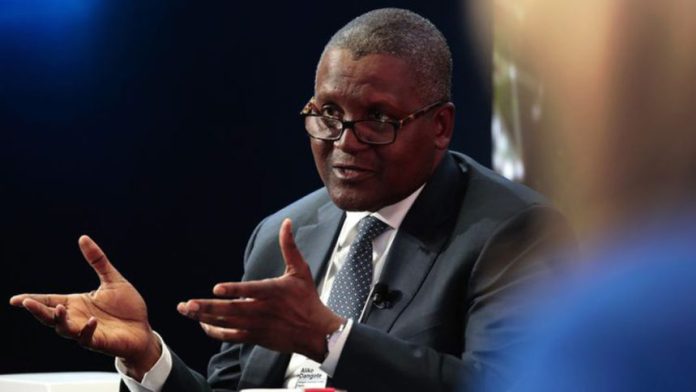 4
SHARES
ShareTweet
The Africa’s richest man, Aliko Dangote has faulted Kenya’s leadership for their greed and persistent failure to place matters of national interest first when it comes to development.
Speaking to a renowned Kenyan journalist, Jeff Koinange, Mr Dangote announced his plans to shelve building a mega cement factory in Kenya after been put off by top decision-makers in the country whom he described as “more corrupt than Nigerians.”
Speaking on his breakfast show in a local FM station, Jeff shared a private conversation he had with Dangote when he attended the billionaire’s daughter’s wedding in Nigeria last month.
“I asked him, ‘Al Hajj when are you coming back to Kenya?’ and he said ‘Jeff, there are people in that place (Kenya) who put greed and personal interest ahead of national interest. I didn’t think Kenya would be more corrupt that Nigeria.‘” Mr Koinange narrated on air.
Mr Dangote, who has been estimated to be Sh1.5 trillion by Forbes, visited Kenya in September 2013 as part of a high-powered delegation of 50 wealthy Nigerian businessmen accompany the country’s then president President Goodluck Jonathan.
The Nigerian tycoon recently pushed the factory’s entry to Kenya to 2021, having earlier planned to build a cement factory in the local market next year.
Mr Dangote is widely known for using lower pricing to gain market share in new markets and its delayed entry will give some reprieve to existing players in a market that is already witnessing stiff competition.