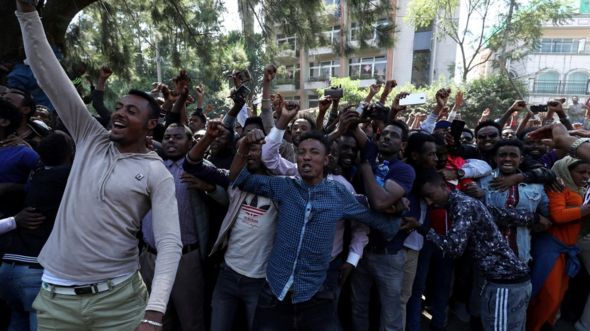 Protesters in eastern Ethiopia have burnt copies of a new book by prime minister and Nobel Peace Prize winner Abiy Ahmed in a show of solidarity with an opposition media activist.

Jawar Mohammed had said the government was removing security from his home in the capital, which officials denied.

This triggered protests outside his compound and elsewhere in the country.

Despite being praised for his reforms the prime minister has struggled to contain growing ethnic rivalries.

The police have disputed that security was withdrawn, but Mr Jawar’s statement fuelled some frustrations with the government.

In the capital, Addis Ababa, supporters offered to act as Mr Jawar’s security detail and protesters were heard shouting: “Down, down, Abiy.” The book burning took place in the town of Dadar.

Copies of Mr Abiy’s book, Medemer, which was published on Saturday, have been distributed across the country. It focuses on the prime minister’s political philosophy as well as his vision for Ethiopia.

During those protests OMN gained a huge following among people in the Oromo community, Ethiopia’s largest ethnic group, who have felt politically and economically marginalised.

At that time the Ethiopian-born journalist was based in the US, where he is a citizen.

But he returned to Ethiopia after Mr Abiy took power in April last year and started introducing reforms.

In a flurry of activity in 2018, Mr Abiy freed thousands of political prisoners, ended a state of emergency and unbanned numerous political parties.

The prime minister has allowed more media freedom in a country that human rights groups had previously condemned for its repression of journalists.

Previously, the authoritarian state had kept a lid on tensions between Ethiopia’s numerous ethnic communities. But many of those tensions have spilled over into open conflict.

The prime minister, who is himself Oromo, has been accused of ignoring the interests of some groups.

Despite returning from exile, Mr Jawar has been critical of Mr Abiy.

This may have irked the prime minister.

“Those media owners who don’t have Ethiopian passports are playing both ways,” Mr Abiy was quoted as saying in parliament by Reuters news agency.

“When there is peace you are playing here, and when we are in trouble you [are] not here.”

Many saw this as a criticism of the OMN chief.

Mr Abiy was awarded the 2019 Nobel Peace Prize earlier this month for resolving Ethiopia’s border conflict with Eritrea, and promoting peace and reconciliation in his own country and in the region.