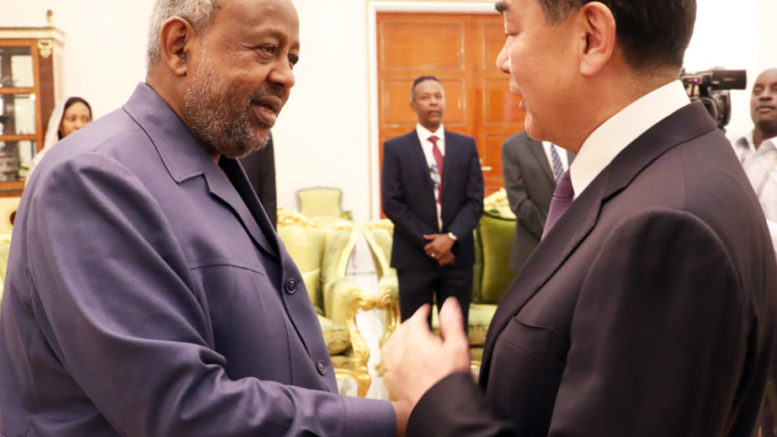 The head of Chinese diplomacy, Mr. Wang Yi, made this statement after a hearing he had today, Thursday, late morning, at the palace of the Republic, with the head of state of Djibouti, his excellency Ismail Omar Guelleh.

The Chinese availability to bring its knighting and blessing to the realization of greater visibility and presence of Djibouti in international bodies is part of the right of a diplomatic ethics of this country which, subscribed to the principle of equity among all nations From the world and, whatever their respective sizes.

“we are committed to the principle of equality between all countries and that, whatever their size”, said in essence Mr. Wang Yi, thus supporting the institutional and legal and legal profile available, at the unit level, The Republic of Djibouti to be the candidate of the East African region to the non-permanent seat of the security council.

The Chinese Foreign Minister’s hearing with president guelleh is the main stage of a trip he has been making since this morning in Djibouti.

Several topics, including the state of friendship and cooperation between the two countries and peoples and the strategic and win-win partnerships that both nations maintain in a critical series of development, were discussed during this meeting.

The Versatile Port (DMP), electric railway and the new free zone of pk 23 are, among other projects, proof of successful economic cooperation between China and the republic of Djibouti.

This is why the Chinese official, in its statement, mentioned the “determination of his country to pursue and extend to all sectors of activities the win-win partnerships with the republic of djibouti”.

” China welcomes the important assistance that, under the leadership of president guelleh, the republic of djibouti brings to it, especially in carrying out its international missions “, said the Chinese Minister, renewing ” the determination of his country to remain A reliable and sustainable ally of djiboutian development. ” “