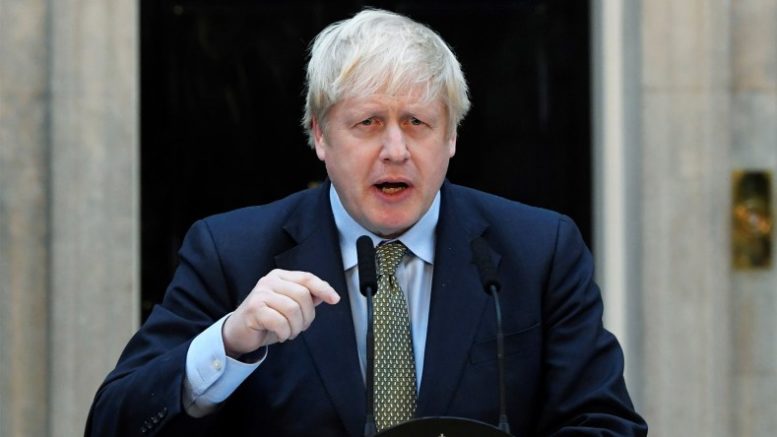 Boris Johnson—the front runner in the race to become the next prime minister of the U.K.—has said he would not support U.S. military operations against Iran as the international community watches Tehran nervously for signs of nuclear proliferation.

Speaking alongside rival and Foreign Secretary Jeremy Hunt at the final leadership debate on Monday, Johnson said he would not support strikes against Iran if he becomes prime minister at the end of this month.

Johnson is widely expected to defeat Hunt in the race to become the next Conservative Party leader—and thus prime minister—when the result of the contest is announced on July 23.

Neither Hunt nor Johnson—both of whom have served as foreign secretary under outgoing Prime Minister Theresa May—pledged to support President Donald Trump if the U.S. went to war with Iran.

Hunt was careful not to give too direct an answer to the question. “The risk we have is something different, which is an accidental war, because something happens in a very tense and volatile situation,” he said.

But Johnson was uncharacteristically frank on the same point, though the former London mayor’s reputation for political duplicity suggests he could change his tune once in office.

Johnson described the regime in Tehran as a “disruptive, dangerous, difficult” administration, but stressed that military action would not be “a sensible option for us in the west,” Bloomberg reported.

“Diplomacy must be the best way forward,” Johnson added. “If you ask me if I think, were I prime minister now, would I be supporting military action against Iran, the answer is ‘No.”‘

Tensions remain high between Washington and Tehran over the beleaguered Joint Comprehensive Plan of Action, colloquially known as the Iran nuclear deal. Since Trump pulled out of the multilateral Obama-era accord last year, the remaining signatories have struggled to keep it alive.

The deal is floundering under the pressure of U.S. sanctions and ramped up Iranian uranium enrichment. Tehran is stubbornly resisting White House efforts to get it back to the table to negotiate a more restrictive agreement.

Britain has been pulled deeper into the crisis after Royal Marines seized an Iranian tanker off Gibraltar earlier this month, which officials said was attempting to transport oil to bolster President Bashar al-Assad in war torn Syria in contravention of European Union sanctions.

Outraged Iranian leaders called for the vessel’s immediate release and threatened retaliation. Days later, Iranian vessels belonging to the Islamic Revolutionary Guard Corps reportedly attempted to seize a British tanker in the strategically-vital Strait of Hormuz, but were chased off by a Royal Navy warship.

Trump appears to have taken a liking to Johnson, and observers have been quick to point out similarities in their opportunistic, populist styles and inflammatory—and often offensive—rhetoric.

Both Johnson and Hunt have tried to avoid public criticism of Trump as their leadership campaigns progress. Trump has been positive about both men but has repeatedly praised Johnson, predicting he would make a “great” prime minister.

But gaffe-prone Johnson has had to balance the boon that Trump’s endorsement has given him with Conservative Party members with the fact that the president is deeply unpopular among the wider British electorate.

Though much of the British public abhors the president’s pugnacious style and proudly nationalist ideology, pro-Brexit politicians and voters have sought closer relations with Trump in the hope of securing a trade deal with the U.S. once the U.K. leaves the EU.

The diplomatic dance was especially evident following leaked emails from the U.K.’s Ambassador to the U.S., Kim Darroch, in which he described Trump’s White House as “insecure,” “clumsy” and “inept.”

The president took the emails to heart, and hit back at Darroch branding him a “pompous fool” and a “very stupid guy.” Unwilling to risk a major diplomatic incident before even becoming prime minister, Johnson failed to defend Darroch in a live leadership debate, prompting widespread condemnation in the U.K.