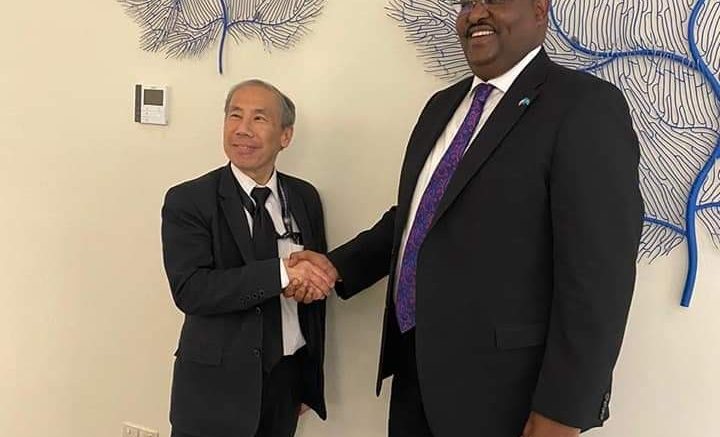 This week Ambassador Don Yamamoto has continued to promote FGS-FMS cooperation that will be critical in 2020 for the political development and future of Somalia, particularly as the country’s leaders prepare federal elections and continue to respond to ongoing threats to security.

The Ambassador met with regional leaders of four of the five Federal Member States to discuss the urgent need to jointly address these challenges for the good of Somalia. A reenergized process of dialogue and compromise will be necessary on all sides. The United States remains committed, determined and focused on advancing our shared goals and objectives of realizing a secure and prosperous Somalia for all Somalis. The people of Somalia demand it, future generations expect it, and Somalia’s leaders must enact it.

On January 23, Ambassador Yamamoto met with Jubaland State leader, Ahmed Mohamed Islam “Madobe”. The Ambassador stressed the urgent need for stakeholders in Jubaland an to end the political stalemate and to focus on jointly fighting al-Shabaab. Ambassador Yamamoto and Madobe discussed advancing the fight against al-Shabaab, strengthening FGS-FMS relations, and the importance of all Somalis working together to advance security, peace, and prosperity in the region.

Also on January 23, Ambassador Yamamoto met with Puntland President Said Abdullahi Deni and discussed U.S. support for Puntland Security Forces, the importance of inclusive national elections, advancing development in the region, and the urgent need for cooperation and dialogue between Member States and the Federal Government.

Also this week, the Ambassador engaged with President Abdiaziz Hassan Mohamed “Laftagareen” to discuss security and development cooperation in Lower Shabelle. The Ambassador urged President Laftagareen to continue efforts to unify FGS and FMS around key national issues, such as debt relief and upcoming elections.

Ambassador Yamamoto similarly met President Mohamed Abdi Waare and discussed the importance of strengthening U.S.-Somalia partnership against al-Shabaab and coordinating with AMISOM. The Ambassador advised on the important role a strong FGS-FMS relationship has for working cooperatively and with vigor to realize Somalia’s goals.