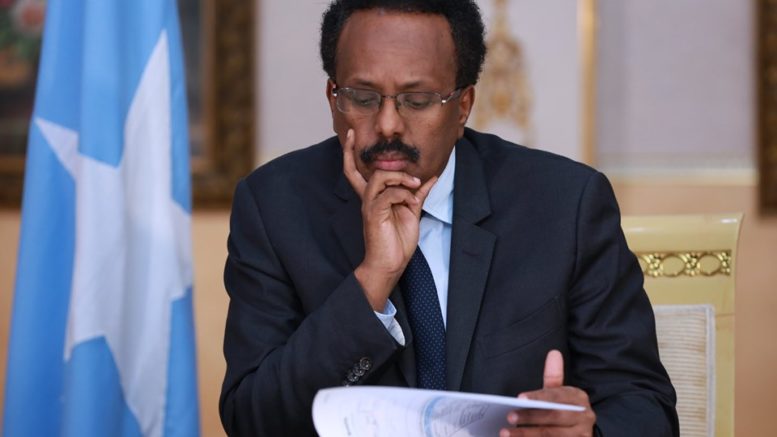 The speech by the President of Somalia at the AU in Addis Ababa was out of line and was incongruent to the theme of the conference. The overarching theme was, according to a press conference hosted by Minister of Foreign Affairs, Mr. Awad, “to silence guns.”

Reading haltingly from a prepared statement at the convention, the President said the following: “Silencing the Guns is a key priority for our continent, and we must do everything to prioritize this at all.”

In the same breath, this time nervous, somewhat ashamed, the President added this incongruent statement to his untimely request: “The UN Arms embargo on Somalia is restricting our ability to acquire weapons necessary.”

According to an insider who was at the conference, this message was not received well by the attendees. Farmajo and his team needed to get the by-in of countries privately first before throwing such a cumbersome issue to an open convention.

Following this disaster is today’s press statement by the US Embassy in Mogadishu that addresses two issues:

(1) It prohibits Villa Somalia from using US-provided assistance to SNAF for non-terrorist activities, and

(2) It calls for a mediated conflict resolution between Villa Somalia and the Federal Member States. Here is a quote from the attached Press note which puts a premium value on a negotiated settlement between the two sides:

“Furthermore, reconciliation between the Federal Government and Federal Member States is an even more vital step towards reestablishing governance, security, and prosperity for all Somalis