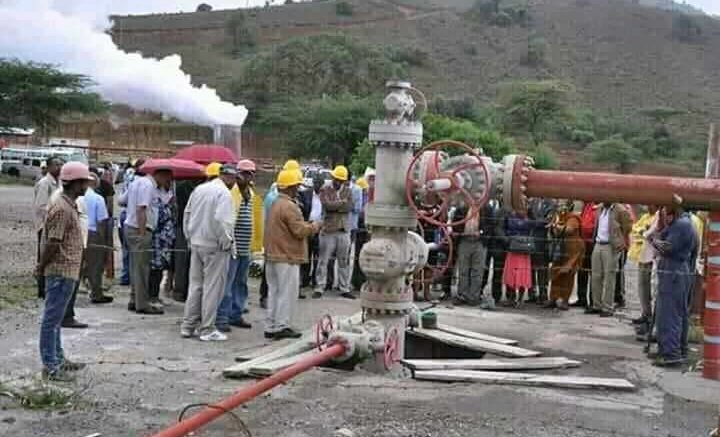 At first, 23-year-old Khadar Abdi Abdullahi’s eyes began turning yellow. Then the palms of his hands did the same. Soon he was bleeding from his nose, and from his mouth, and his body was swelling all over. Eventually he collapsed with fever. He later died.

A deadly sickness is spreading through villages near a Chinese natural gas project in Ethiopia’s Somali region, according to locals and officials who spoke to the Guardian. Many of Khadar’s neighbours have suffered the same symptoms. Like him, some died.

It is not clear what is causing the sickness, and officials in the federal government in Addis Ababa firmly denied allegations both of a health and environmental crisis in the Somali region, or of any problems relating to large-scale energy projects there.

Poly-GCL, a partly state-owned Chinese company, has been prospecting for oil and gas in the Ogaden Basin, as the vicinity is known, since 2014. Calub, roughly 500km south-east of Jigjiga and near neighbouring Somalia, is due to start commercial gas production soon.

Khadar, like many from the area, is suspicious that the sickness is caused by hazardous chemical waste that has poisoned the water supply.
“It is the toxins that flow in the rainfall from Calub [gas field] that are responsible for this epidemic,” said Khadar, as he sat outdoors in the eastern Ethiopian city of Jigjiga.

He had recently been discharged from hospital; doctors there said there was nothing more they could do for him. He was weak and thin and his eyes were sinking into their sockets.

“There are new diseases that have never been seen before in this area,” said an adviser to the Somali regional government, speaking on condition of anonymity.

Sign up to the Green Light email to get the planet’s most important stories Read more“Without any public health protection, it is very clear that Poly-GCL uses chemicals that are detrimental to human health.”

It is an allegation the Guardian heard repeatedly during a recent visit to the thinly populated scrubland that surrounds Calub gas field, though it was not able to independently verify its veracity.

Ketsela Tadesse, director of licensing at the federal ministry of mines and petroleum, said the government was not aware of any reports of spillages, adding that in any case there were “there are no permanent settlers” in the vicinity of the gas field.

“We can emphatically state that all the gas wells at Calub and elsewhere in the Ogaden Basin, are sealed, safe and secured … according to international standards,” Tadesse said.

What is clear, however, is that the mysterious sickness has caused deaths.
Ceeble Tuuba, a resident and prominent activist in the town of Haarcad, said her neighbour Cambaro Tawal was the first local to die from it, in 2014.
“The widespread symptoms from which locals living around Calub die are different from all others,” she said.

Tuuba cited the example of her two year-old nephew, who was taken to the hospital in Jigjiga earlier this year. He stayed there for a month, receiving multiple blood transfusions to no effect. He died after being discharged from hospital.

His symptoms were those common to all who have contracted this unidentified sickness, she said: swelling, fever, sleeplessness, yellowing eyes and palms, and lack of appetite.

A doctor from the referral hospital in Jijiga, who surveyed the area but wished to remain anonymous, said most of the symptoms locals exhibited in the clinics he visited were life-threatening.

Ceeble said “countless” of her neighbours had died in this way in recent years.

Hassan Ali, a doctor at a health clinic in Haarcad, claimed there is a direct correlation between the number of reported cases in each village and its proximity to the Calub wells.

Xuseen Sheekh Siraad, the chairman of Dhoobaweyn district, estimated that there have been at least 2,000 deaths since 2014.

But there is no official death toll and those who live around Calub are predominantly nomadic pastoralists, whose contact with the Ethiopian government is limited. Many bury their dead without informing local officials.

ShideFacebookTwitterPinterest A ceremony marking crude oil extraction is attended by Abdi Mohamoud Omar, right, the former president of Ethiopia’s Somali region, foreign envoy Meles Alem, centre, and former comms minister Ahmed ShideFurthermore, Hassan explained, most do not come to the clinic, and even if they do it does not have the facilities to treat or even diagnose serious cases such as liver failure.

Last year, Poly-GCL conducted the first ever crude oil extraction tests in the Ogaden Basin. It also signed a memorandum of understanding with neighboring Djibouti to invest $4bn (£3.1bn) in building a 760km pipeline from Ogaden to the Djiboutian coast, which will enable Ethiopia to export as much as 6.3tn cubic feet of natural gas.

“Oil production should never be a bane to us,” he declared, adding that earnings at full capacity could be as much as $7bn a year. Exports, he said, would begin in 2021.

But oil and gas exploration has a long and troubled history in the Ogaden.
When the former Ethiopian emperor Haile Selassie first embarked on oil exploration in the Ogaden in 1945, mass demonstrations forced him to suspend the project.

In 2007, rebels from the secessionist Ogaden National Liberation Front stormed another Chinese-run oilfield, killing 74 workers and destroying the facility.

The Ethiopian government responded by launching a counter-insurgency campaign involving tactics so brutal that Human Rights Watch said they amounted to crimes against humanity. Whole villages around Calub were razed to the ground.

The area remains heavily militarised, with police and soldiers patrolling the highway and the gas field’s 40km restricted zone.

Ismail Qamaan, 63, has lived his whole life in the Calub area and remembers the arrival of a German firm in the 1960s. He said a large truck recently drove across his neighbourhood, spilling a white substance.

Deaths increased following this spillage according to Ismail. “They have destroyed everything that we had,” he said. “They must account for what they did.”

But the most serious allegations came from two former employees of Poly-GCL.

Speaking on condition of anonymity, an engineer who worked for the company in Calub for three years said that there were regular spillages of deadly drilling fluids including sulphuric acid.

Exposure to such chemicals can lead to liver failure and stomach cancer.
Ali Hassan Farah, another former employee, said that “those indigenous to the land die from raw toxins spilled out of sheer carelessness. Operational companies in Calub have forfeited their duty to protect local people.”

However, chemical spillages could have been caused by local Ethiopian transport firms, for instance, not Poly-GCL, and it is also possible that environmental damage predates the company’s arrival in the area.

At least two environmental impact assessments related to oil and gas development in the Ogaden have been carried out. The results have not been made public.

Ketsela said all impact assessments had been “checked and certified by relevant governmental bodies, and the ministry of mines and petroleum has been monitoring the situation since then”.

Since August last year there has been a new government in Somali region, led by acting state president Mustafa Omer, who has been praised for his reforms.

An official told the Guardian that the region was trying to repair the damage done under its authoritarian predecessor, including in the management of natural resources.

“We have established an office for energy, mines and petroleum as well as an office dedicated to the environment … We are seriously dedicated to addressing the decades of marginalisation and abuse that have resulted from oil and gas exploration.”

Meanwhile, the federal government in Addis Ababa, the capital, recently announced a revenue-sharing formula that will grant the host region 50% of any income from oil or gas exploration, 10% of which will go directly to the production area. The rest will be split between the federal government and Ethiopia’s other regions.

Locals are sceptical. Many are particularly worried about the construction of the pipeline, for which feasibility studies are currently underway.
They said that once again they have not been consulted, and feared it could further disrupt their grazing lands and natural environment.

“Not a single person has ever asked us about our plight,” said Ismail.
As 2020 begins…… we’re asking readers, like you, to make a new year contribution in support of the Guardian’s open, independent journalism.

This has been a turbulent decade across the world – protest, populism, mass migration and the escalating climate crisis. The Guardian has been in every corner of the globe, reporting with tenacity, rigour and authority on the most critical events of our lifetimes. At a time when factual information is both scarcer and more essential than ever, we believe that each of us deserves access to accurate reporting with integrity at its heart.

More people than ever before are reading and supporting our journalism, in more than 180 countries around the world. And this is only possible because we made a different choice: to keep our reporting open for all, regardless of where they live or what they can afford to pay.

We have upheld our editorial independence in the face of the disintegration of traditional media – with social platforms giving rise to misinformation, the seemingly unstoppable rise of big tech and independent voices being squashed by commercial ownership.

The Guardian’s independence means we can set our own agenda and voice our own opinions. Our journalism is free from commercial and political bias – never influenced by billionaire owners or shareholders.

This makes us different. It means we can challenge the powerful without fear and give a voice to those less heard.

None of this would have been attainable without our readers’ generosity – your financial support has meant we can keep investigating, disentangling and interrogating. It has protected our independence, which has never been so critical. We are so grateful.

As we enter a new decade, we need your support so we can keep delivering quality journalism that’s open and independent. And that is here for the long term. Every reader contribution, however big or small, is so valuable. Support The Guardian from as little as €1 – and it only takes a minute.