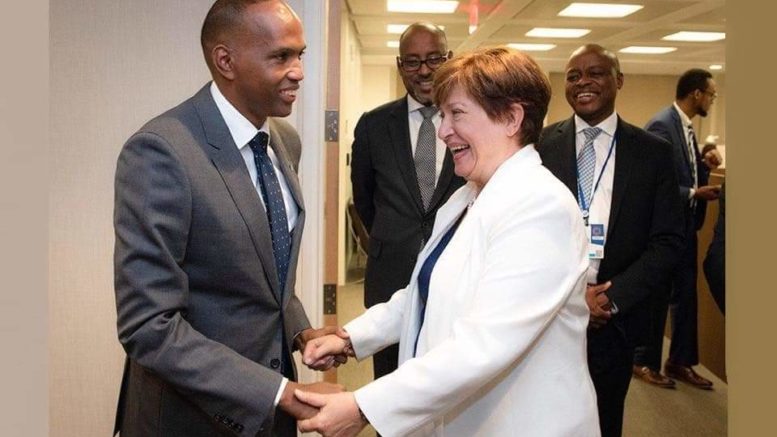 SOMALIA TO RECEIVE DEBT RELIEF UNDER THE ENHANCED HIPC INITIATIVE

The International Monetary Fund (IMF) and the World Bank’s International Development Association have determined that Somalia has taken the necessary steps to begin receiving debt relief under the enhanced Heavily Indebted Poor Countries (HIPC) Initiative. Somalia is the 37th country to reach this milestone, known as the HIPC Decision Point.

Debt relief will help Somalia make lasting change for its people by allowing its debt to be irrevocably reduced from US$5.2 billion at end-2018 to US$557 million in net present value terms (NPV) once it reaches the HIPC Completion Point in about three years’ time. As Somalia continues on its path towards stability and development after 30 years outside the international financial system, the immediate normalization of its relations with the international community will re-open access to critical additional financial resources to strengthen the economy, help improve social conditions, raise millions out of poverty, and generate sustainable employment for Somalis.

“We welcome Somalia’s efforts to restore stability, engage with creditors, and adopt a poverty reduction strategy,” said World Bank Group President David Malpass. “Resumption of regular financing to Somalia is an important landmark, and we look forward to further economic and social progress.”

“I would like to congratulate the Somali government and people for their intense efforts over the past years leading to this momentous event,” said Kristalina Georgieva, IMF Managing Director. “Successful reform efforts have laid the foundation for inclusive economic growth and for addressing the needs of the country’s most vulnerable people. Work must continue to sustain and expand the implementation of these reforms as Somalia starts a new chapter of its history. I am confident a more resilient and prosperous future lies ahead for the people of Somalia.”

“The Government and People of Somalia are very pleased by the IMF’s and World Bank Group’s decision which allows Somalia to fully re-engage with International Financial Institutions. This decision is an important milestone which presents ample opportunities for Somalia as it relentlessly pursues its ongoing reform processes as well as its recovery and development agenda,” said Hassan Ali Khayre, Prime Minister, Federal Government of Somalia. “The journey leading to this decision required hard work, dedication and partnership. The FGS expresses its appreciation to the IMF, World Bank Group and partners for their unwavering support and to the Somali people for their patience and resilience in this journey.”

Somalia has committed to maintaining macroeconomic stability; implementing a poverty reduction strategy; and putting in place a set of reforms focused on fiscal stability, improving governance and debt management, strengthening social conditions, and supporting inclusive growth in order to reach the HIPC Completion Point. The World Bank and IMF will continue working together to provide the technical assistance and policy guidance the authorities need to achieve these goals, including in the context of the new, three-year IMF financial arrangement.

In addition, the World Bank is considering a range of new IDA investments with a focus on immediate relief for communities impacted by flooding, the locust invasion as well as preparing for the fast-moving threat of COVID-19. The leadership of the World Bank Group and the International Monetary Fund expressed thanks to their member countries of all regions and income levels, in particular Italy, Norway, Qatar, and the United Kingdom, together with the EU, whose interventions catalyzed support and provided the necessary financial resources to help Somalia reach the Decision Point.

Details of the Debt Relief Operation

At the start of the HIPC process, Somalia’s public- and publicly-guaranteed external debt was estimated at US$5.2 billion in NPV terms. Application of traditional debt relief mechanisms reduces this debt to US$3.7 billion.

Additional debt relief under the enhanced HIPC Initiative is estimated at US$2.1 billion in NPV terms. Of this amount, US$843 and US$1,225 million is projected to be provided by official multilateral and bilateral creditors, respectively.

Paris Club creditors are expected to make a decision on debt relief by the end of March 2020. The largest Paris Club creditors are the United States, Russia, Italy, and France. The IMF Executive Board has approved interim debt relief on debt service falling due to the IMF in the period between the HIPC Decision and Completion Points. At the HIPC Completion Point, Somalia’s current debt due to the IMF will be paid with the proceeds of financial contributions that have been received from over 100 IMF members, including many low-income countries.

MDRI debt relief from IDA and the African Development Bank would cancel all remaining claims at the Completion Point.

Together, Somalia’s external debt burden is expected to fall from about US$5.2 billion (110.7 percent of GDP) in NPV terms as of end-2018 to US$557 million (9 percent of GDP) once the Completion Point is reached.

Arrears to IDA were cleared on March 5, 2020 through bridge financing provided by the government of Norway, reimbursed with the proceeds of a Development Policy Grant.

Arrears to the IMF were cleared on March 25 with the assistance of bridge financing from the government of Italy, which the authorities have reimbursed using the front-loaded access under the new IMF financial arrangement.

Arrears to the African Development Bank were cleared on March 5, 2020 through bridge financing provided by the government of the United Kingdom and a contribution from the EU. The bridge loan from the UK was reimbursed by the proceeds of a Policy Based Operation Grant.
The HIPC Initiative

In 1996, the World Bank and IMF launched the HIPC Initiative to create a framework in which all creditors, including multilateral creditors, can provide debt relief to the world’s poorest and most heavily indebted countries to ensure debt sustainability, and thereby reduce the constraints on economic growth and poverty reduction imposed by the unsustainable debt-service burdens in these countries. To date, 37 HIPC countries, including Somalia, have reached their decision points, of which 36 have reached the completion point.

Created in 2005, the aim of the Multilateral Debt Relief Initiative (MDRI) is to reduce further the debt of eligible low-income countries and provide additional resources to help them reach their development objectives.

Under the MDRI, three multilateral institutions – the World Bank’s IDA, the IMF and the African Development Fund– provide 100 percent debt relief on eligible debts to qualifying countries, at the time they reach the HIPC Initiative Completion Point.