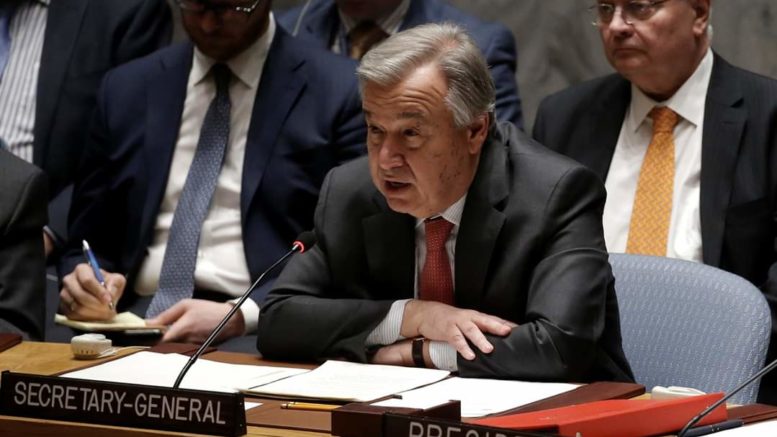 I was too accurate in trying to unmute and accidently hit the end button. So, thank you for that and thank you, Special Representative Swan, for joining us today and for your leadership of UNSOM.

The United States welcomes the positive developments Somalia has made so far this year. Debt relief has opened new access to international grants to support economic growth, development, and reform. The Somalia National Army forces and AMISOM have continued to gain ground south of Mogadishu against Al-Shabaab. And the meeting between President Farmaajo and Somaliland President Bihi on the margins of the AU Summit in February holds promise for reconciliation between Somalia and Somaliland. It also gives hope for ongoing reconciliation efforts in Jubaland and Galmudug.

However, there are also challenges and obstacles that require further attention, as many of the other Council Members have highlighted today.

The United States condemns Al-Shabaab’s and ISIS-Somalia’s ongoing campaigns of violence and terror. We express our deepest condolences to victims and their families, and remain committed to working with Somalia and our international partners to counter their threat. We acknowledge the tremendous sacrifices that AMISOM troop-contributing countries have made in this important fight.

While the progress made by the Somali National Army and AMISOM to clear and hold territory in the Lower Shabelle is historic, much work remains to be done, including the expansion of their control of other areas. We call on the FGS to equip and deploy a police presence to liberated towns in order to maintain security and reestablish government services in Lower Shabelle and beyond.

We welcome Somalia’s continued commitment to holding elections on schedule beginning later this year, but we are concerned that planning and implementation is falling far behind schedule. We call on parliament to pass outstanding electoral legislation, and for Mogadishu to bring together federal member states, civil society, and other relevant stakeholders to reach consensus on the electoral process. We encourage each of these parties to work together and to agree on a practical model for peaceful, timely, inclusive, and credible elections.

We regret that the Federal Government of Somalia and federal member state leaders still have not met at the leadership level to discuss national priorities and reforms, despite repeated calls from this Council. We urge President Farmaajo to call a meeting of the National Security Council, as required by the Constitution, as soon as possible to discuss elections planning, security cooperation, and other urgent national priorities. We also remain concerned that security resources needed to fight Al-Shabaab are being misused for political rivalries in certain regions.

Federal cooperation is all the more critical given the multitude of humanitarian crises facing Somalia as a result of COVID-19, flooding, and locusts. COVID-19 appears to be spreading rapidly in Somalia, which lacks the resources and health infrastructure to effectively respond. We underscore the need for timely, reliable, and more equitable humanitarian assistance, and we encourage other governments to join us as we pledge our ongoing support to assist with humanitarian aid, and to help mitigate the crop damage and food insecurity the swarms and flooding are causing.

Considering these many challenges, looking to the AMISOM mandate renewal this month, we must consider how AMISOM can more effectively respond to the persistent threat of Al-Shabaab. Elements include strengthening its command and control structure, prioritizing more mobile combat operations, and increasing its focus on mentoring and advising SNA forces in the field.

The AMISOM mandate renewal is also an opportunity for this Council to send a strong message to all stakeholders in the region that transitioning security responsibilities to the Somalis remains a priority. We are still very concerned that the Somalia Transition Plan remains off track. Implementation of the transition plan must accelerate this year to prepare for the transition of security responsibilities from AMISOM to Somali forces in 2021. We welcome efforts to update the plan, but meeting the existing benchmarks remains the primary challenge. We urge that the plan assess impediments to progress and lay out steps to meet benchmarks for force generation, security sector reform, and civilian security.

The United States remains a steadfast partner in its commitment to promoting peace and stability in Somalia, and to working with our international partners in assisting the country reach its goals for a peaceful and prosperous future. And we also welcome the Somali PR with us today and the other briefers.

Thank you so much.