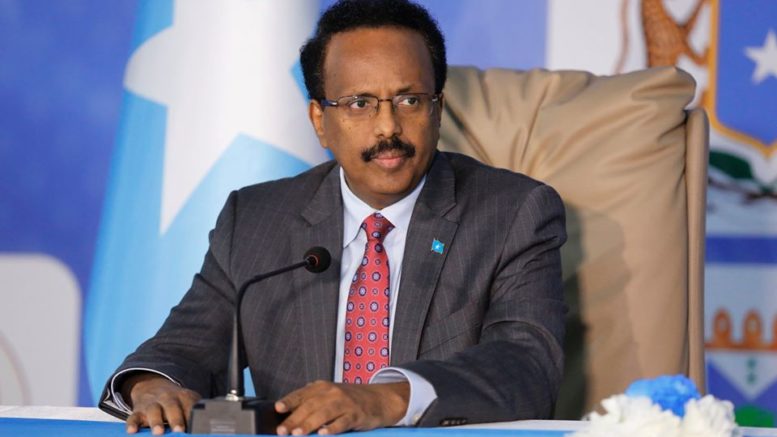 Somalia’s embattled president has hired a US lobby shop to help build inroads with Congress amid growing criticism from the Joe Biden administration over stalled elections in the East African country.

The Embassy of Somalia retained New Jersey-based lobbying firm LFA Holdings last month to help organize a US visit for President Mohamed Abdullahi Mohamed, according to a new filing with the US Department of Justice. The filing states that LFA is expected to help set up meetings with members of Congress and think tanks, but makes no mention of the executive branch.

“LFA’s work scope includes but is not necessarily limited to show support for a US Congressional Visit,” LFA CEO Luis Aleman wrote in a letter of agreement with Somali Ambassador Ali Sharif Ahmed. “LFA will also help strengthen relations with the private sector for FDI (foreign direct investment) opportunities.”

LFA is to be paid $150,000 for the work, according to Aleman’s individual registration under the Foreign Agents Registration Act (FARA). Aleman is the only registered lobbyist on the account.

The letter of agreement is dated March 22, just three days after Secretary of State Antony Blinken issued a statement calling for Somalia to hold elections “immediately.” Somalia was supposed to hold presidential and parliamentary elections in February, but they have been delayed amid disagreements over the electoral process between the federal government and leaders of the country’s five regional states.

On April 13, Blinken issued another statement, saying the US was “deeply disappointed” by the federal government’s decision to approve a legislative bill that extends the mandates of the president and parliament by two years. President Mohamed’s four-year term officially ended in February.

“Implementation of this bill will pose serious obstacles to dialogue and further undermine peace and security in Somalia,” Blinken said. “It will compel the United States to reevaluate our bilateral relations with the Federal Government of Somalia, to include diplomatic engagement and assistance, and to consider all available tools, including sanctions and visa restrictions, to respond to efforts to undermine peace and stability.”

LFA Holdings and the Embassy of Somalia in Washington did not respond to requests for comment.

President Mohamed, who goes by the nickname “Farmaajo” because of his love of cheese, lived for many years in Buffalo, N.Y., before returning to his native Somalia to serve as prime minister in 2010. He only relinquished his US citizenship after becoming president.

Tibor Nagy, a former US Assistant Secretary of State for African Affairs under President Donald Trump, said the Somali president may be casting for new allies in Washington amid deepening skepticism by the Biden administration. Nagy said Mohamed was gifted at appealing to western aid donors but faces experienced Africa hands in the Biden administration, including Ambassador to the UN Linda Thomas-Greenfield, a former assistant secretary of State for African Affairs, and the nominee for that position, former ambassador to Sudan Mary Catherine “Molly” Phee.

“I think that the Somalis recognize that they’re not going to be able to sell their bill of goods to the administration, so why not start with Congress,” Nagy told Foreign Lobby Report. “I can assure you there’s a great deal of cynicism on the part of Somalia on the part of Congress.”

Somalia’s priorities include preserving US foreign aid, which topped $137 million in last year’s budget request, most of it in “peace and security aid” to help combat the threat of Al-Shabab and other extremist groups. Farmaajo has also spoken out against Trump’s decision last fall to withdraw the 700 or so US troops from the country. The top military commander for US Africa Command, Gen. Stephen Townsend, told a Senate panel on Thursday that the withdrawal had created “new layers of complexity and risk” in the country.

To help improve Somalia’s fortunes in Washington, the embassy has turned to a New Jersey businessman with deep ties to Africa. Aleman’s LinkedIn page lists him as the managing director of Ethiopian Wild Coffee, a specialty import/export company.

Last month, he belatedly disclosed lobbying activities for the embassy of the Democratic of the Republic of Congo, including helping to organize meetings for President Felix Tshisekedi during his April 2019 visit to Washington. Aleman told the Department of Justice when he registered as a foreign agent back in March 2019 that the firm’s compensation for the services would take the form of “discussion of ongoing services.”

Somalia only has limited lobbying support beyond LFA, according to a review of lobbying filings.