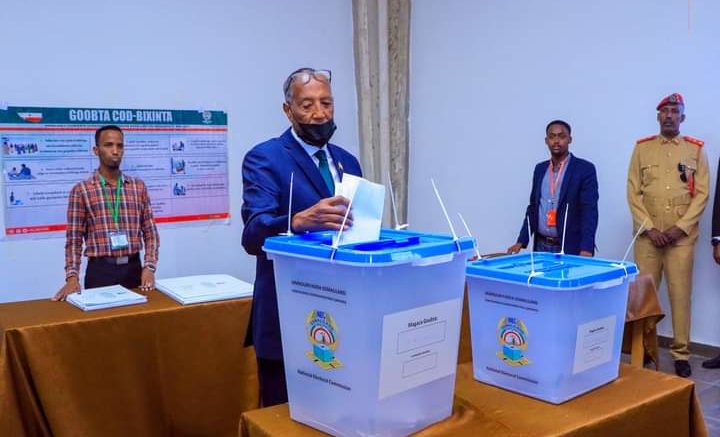 On Monday, May 31, 2021, in an un-forseen turnout, the people of Somaliland voted. Its my attestation that the nations of the world were watching clearly and in plain sight. Nothing is perfect in this planet Earth, however, Somalilanders from all walks of life went to the polling stations earlier this morning, and voted. ▪︎Some walked, some drove, some wheeled, but they showed up. There were no major bottlenecks l can mention as of now.
▪︎Any mortal with Somali blood running through his or her veins should, or must say Masha Allah. This is beyond politics. In essence, the democratic maturity that the people of Somaliland have went through since its inception in1991 has finially come to fruition.
Democratization in general is a slow process.Remember, Rome was not built in a day.
▪︎I encourage all Somalis to send a congratulatory message to their fellow brothers & sisters of Somaliland. As a true African, student, scholar on african affairs, senior researcher, and expert, as well as a professional in this region, I am happy the process of this election went well.
▪︎Indeed, I, careless as to who won or lost. To analysts like I and others with trained minds, what matters the most is the process, and that the procedures were all followed, and that the election itself was fair and free.
▪︎You might be naive if you expect everything to be correct 99% of the time. If so, for your own sanity and well being with such election processes, please consider the human factor.
▪︎My message of the week, “Somaliweyney, maanta waa in lala Tamashaado Somaliland.”
▪︎Today is a day of joy. Earlier today, the spokesperson for the Federal Government of Somalia sent a congratulatory message on behalf of the Somali people.
▪︎ Since we are mortal and complex by virtue of being human, we can take different political and ideological stances on issues. ▪︎For those who gets excited or elated when they hear the word Somaliland & for those who are on the other side of the aisle and are allergic to that word, all should know that not all, but many inhabitants of the former British colonies made, peacefully, by voting today, “The impossible, possible.”
● Backgrounder
Unless you’re in denial, thus far, the people of SL, have made their own:
▪︎Completed constitution. Please note, I stated Completed Constitution & not Qabyo Conistitution.
▪︎ Own their own police forces, and have established multiple police academies.
▪︎ Established Defence forces, some of them being highly mechanized brigades or armies, Including regular ground troops & various units trained by special forces for the sole purpose of special or “certified missions”, signed off on by none other than the president himself. They also created a limited but functioning navy that successfully dealt with pirates, and continues to inquire the International Merchant Marines that enter the territorial waters.
▪︎They created their own currency, called Somaliland Shillings
▪︎ They made possible a long term peace & tranquility that brought prosperity.

▪︎ In summation,
To the people of Somaliland: you have done very well on your own. In fact, you have done it without any discretionary or rolling funds from foreign nations. You performed tasks that some thought could not be achieved. You proved to the world and international community that you are for real, capable, and can do it with minimum or no supervision at all.

▪︎Remember, the democratic process is a long, long process. It goes on for generations to come. For example, my beloved country of America can not dare to claim itself to be a fully fledged democratic country.
▪︎We are wishing you more successes with your future endeavors.