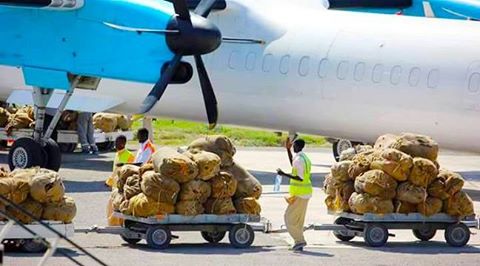 If Somalia is to survive as a nation-state and having at least a normal functioning government with even average bureaucratic operations, it must urgently find effective solutions to the epidemic of Kat addiction among its population as a national priority. The problem is more than socio-economic issue. It is a grave national security threat as well.

In the summer of 1997, I was a member of a delegation of the now defunct National Salvation Council (the NSC, aka Sodare Group) from Addis Ababa, Ethiopia, to Mogadishu, Somalia. The delegation members included NSC Co-chairmen, Ali Mahdi Mohamed and Abdullahi Yusuf Ahmed as well as Council members that included Mohamud Mohamed Guled (Gacmadheere), Duuliye Sare Abdi Osman Farah among others. We numbered about 13 men and one female. We were on our way to meet with an Italian delegation led by then Deputy Foreign Minister for Africa, Senator Serri, who was about to visit Mogadishu for the sole purpose of mediating between disputing Mogadishu warlords despite many other problems of Somalia. The vision of the Italian delegation on solving Somalia’s predicament was not beyond the Banadir Region at that particular time.

Abdullahi Yusuf’s intention in the mission was to disrupt the Italian visit (which he did successfully) while Ali Mahdi’s was to win over the Italian favor against Hussein Aidiid and Osman Ali Atto.

We made a two-day stop-over in Djibouti. The Prime Minister of Djibouti then, Barkat Gourad Hamadou, honored us with a lavish luncheon with tender baby-goat’s meat and other delicacies of Djibouti at his residence. After the lunch, we were taken to a large and well furnished room with an Arabic seating with soft cushions specifically designed for long-time session in comfort for Kat indulgence, gossiping experience, news and secrets debriefing under the “high” influence of the stuff. In front of every person a bazooka-like wrapping was placed and a  large silver tray full of the tools of the trade: A big and tall golden tea thermos, crystal glasses, shining and engraved tea-mugs, various branded cold soft drinks in plastic Coca Cola –type bottles and commercially distilled water in gravines with swimming crystal clear ice-rocks, all to be consumed in the breezing air-condition of the room- an artificial weather hide-out from the environment of burning heat of the City of Djibouti.

After a few chit-chats, Prime Minister Hamadou noticed that none of the members of our delegation was using the stuff as they were all non-chewers, at least, at that period of time. The Prime Minister was a bit annoyed and asked: “Why are you in civil war then, if there is nothing to fight for?” I guess we spoiled the daily indulgence session for our generous, high-level Djibouti host. Luckily, the conversation didn’t break up as we a had had a lot to discuss on Somalia, Somalia-Djibouti past and future relationships and the Horn of Africa, in general.

During those few years, I discovered, in separate sessions, that Ismail Omar Gheleh, the current President of Djibouti, was pondering about his desire to join his tiny country with Ethiopia as he was desperately convinced that Djibouti would not survive on its own. There was  rampant corruption in the seaport operations, the main revenue generating enterprise besides the high spending men of the French legionnaires at Djibouti night clubs. The City of Djbouti was on the verge of being taken over by the influx of Ethiopians, who needed no immigration papers to come in. It was only Puntland help in 1999 to commit him to Somalia’s National Reconciliation process, encouraging him to take it over from Ethiopia, an AU and IGAD Mandated Country for Somali National Reconciliation Process. President Abdullahi Yusuf convinced President Daniel arab Moi of Kenya to support President Ismail Omar Ghueleh to play the role. It was undoubtedly a diplomatic success that pushed Ethiopia aside from the Somali issues.  One may guess already why Ethiopia was not happy with President Yusuf lately. The second help came to Djibouti from post-9/11 World Order. Besides God’s wish, it was only these two factors that saved Djibouti from voluntary union with Ethiopia. Unfortunately, he betrayed Puntland State during the initial phases of the Arta Conference, a rift that eventually undermined the TNG of Abdulkassim Salad Hassan to pave the way for holding Embagati (Kenya) all inclusive and broad-based Somali National Conference and finally, the establishment of the Transitional Federal Government of the Somali Republic (TFG) in 2004, transforming it into the Somali Federal Republic in 2012.

Suddenly, the Prime Minister shared with us the socio-economic devastation Kat consumption has been causing on Djibouti at the time. He informed us that Djibouti was paying Ethiopia a hundred thousand US dollars daily, and that was only the portion of the payments that goes though from bank to bank. Think about residents who buy the stimulant on their own from individual Chat traders on the top of train and air passengers who also bring sacks of the green leaves to their families, relatives and friends in Djibouti cities.

On a number of occasions, I stopped over in Djibouti for a short stay. On multiple times, arriving at Djibouti International Airport, I used to see popular demonstration-like commotion at the gates of the airport-population rushing to the airport when Kat cargo delivery from Ethiopia is delayed for only a few hours. One would see custom and passport control officers whose mouths are asymmetrically filled with Qat and chewing it on the job. Think about the officers’ mental judgment and decision-making capability under the influence of the hyper-leaves at country’s highly sensitive and main border entry point.

The situation is even worse in Somalia with a few millions of US dollars spent every day on the habit. With no credible fiscal statics available, the country may be fast sinking into public and personal bankruptcy. A failed state desperately trying to recover from decades of civil war and total collapse of public services and institutions, has also population wholly consumed by the epidemic of daily Chat use, effectively destroying the socio-economic fabric of its society, abysmally curtailing manpower productive hours and bringing havoc to family livelihoods and relationships while it is also at same sometime constitutes an instigator and main source of corruption and loose social morals. A country with the geographical size larger several times than Italy or UK with porous long borders with Ethiopia and Kenya requires alert and non-Chat chewing security personnel and efficient bureaucracy.

The irony is that Somalis nowadays like to talk about safeguarding their sovereignty and territorial integrity, while at sometime allowing their neighbor states to dump poisonous addictive Kat to their citizens, drain their economy, disable their manpower and threaten their vital national security interests. Think about the real double-talk and double standard with a proverbial ostrich attitude!

Somalia has to come up with a solution to the menace of the Qat. While fully it is understandable that it is tough to try to ban the habit outright, at least a committee of experts should be immediately setup to study the problem and submit recommendations to competent bodies for, at minimum, regulating it and eventually outlawing it. Massive public education and media programs relating to its dangerous hazards to personal and public health should be initiated and launched immediately to stop the spread of the habit to young generation. Somalia cannot afford to continue to ignore its greatest, silent killer of its productive members of the society and the gravest national calamity posed by Kat trade.