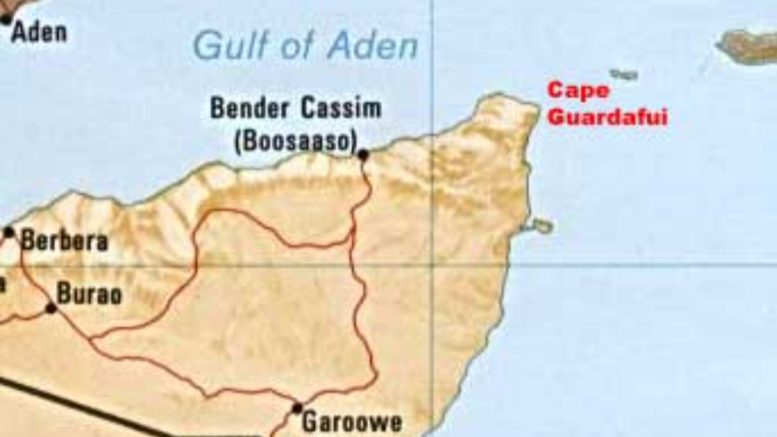 Cape guardafui, also known as Ras Asayr (Casayr), at intersections of the Red Sea and Indian Ocean is a natural Suez Canal of the Horn of Africa. It is located within the territorial waters of Puntland/Somalia. More than a half of the international shipping pass by. In the old days before the advance in navigation technology, there was a permanent light house erected at Cape to guide the huge number of commercial ships passing through. Italian Colonial Administrations in Somalia collected fees from international liners crossing at the Cape. It would have been prohibitively too expensive for shipping world sailing to India and Far East to go around the Cape. Basically, the Cape connects the world in a way Suez Canal of Egypt couldn’t.

During the initial years of Puntland establishment, the late Vice President of Puntland, Mohamed Abdi Hashi, and I had decided to explore the possibility of developing the Cape into a tourist resort, providing recreational facilities, service bankers for fresh water, sunshine, fuel and luxury hotels for international travelers on tourist cruise ships. We had persuaded a Swiss expert to study our project proposal and to visit the Cape. He reported to us about the potential of the area for tourist attraction and benefits it offers to international commercial liners. We gave him the permission to go ahead and lobby for the project. Swiss government officials were impressed to consider encouraging Swiss companies to carry out feasibility studies. In the end, unfortunately, they were deterred by US government under the pretext that Puntland State wasn’t a sovereign country able to enter into an international treaty of that magnitude. Moreover, the Americans claimed this waterway was an international passage that couldn’t be disturbed. The pursuit of our project was adjourned, waiting for another day to re-start.

During the course of project studies, we learned a few historical facts. Almost all international commercial shipping fleet of the world is insured by the British Lloyd Insurance Marketplace. Insurance fees shot up suddenly then as false rumors had spread around the world that the people living in Cape Guardafui practised “cannibalism” and that was the reason why attendants of the light house at the Cape often disappeared, endangering ships passing by there. Later, it was found out that the residents of the Cape had been persuading these attendants to abandon their duties by resettling them there into family life, so that people could take advantage of shipwrecks as the light house guiding the ships goes off.

The story of “bad kasoo bax, Boqor baa leh (All findings from the sea belongs to the King), perhaps, had originated from this wild story of the Cape Guardafui Light House. Check it out.