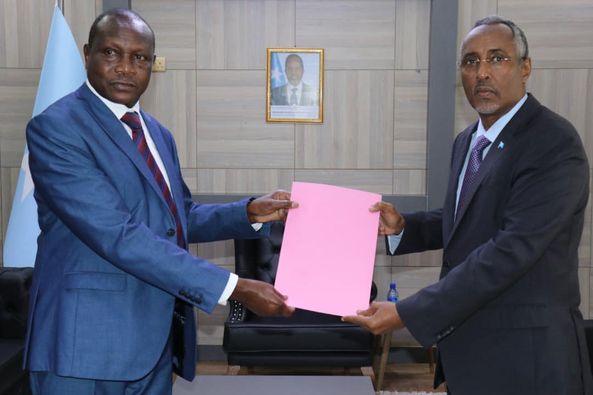 The Minister of Foreign Affairs and International Cooperation, H.E. Mr. Abshir Omar Jama, received today in his office at the Ministry a copy of the credentials of the Ambassador of the Republic of Kenya to the Federal Republic of Somalia, Amb. Maj. Gen. Thomas Chepkuto.

During the meeting, the Minister of Foreign Affairs welcomed the newly appointed Kenyan ambassador, wishing him success in his assigned duties, and alluded to the importance of advancing joint cooperation between the two neighboring countries and moving them forward towards broader horizons in the service of common interests. He also sent, through the ambassador, his congratulations and blessings to H.E. William Ruto as the new elected president of Kenya.

For his part, Ambassador Thomas Chepkuto expressed his happiness to meet the Minister of Foreign Affairs, stressing his country’s pride in its relations with Somalia, and its keenness to raise them to serve the aspirations of the two friendly countries and peoples.