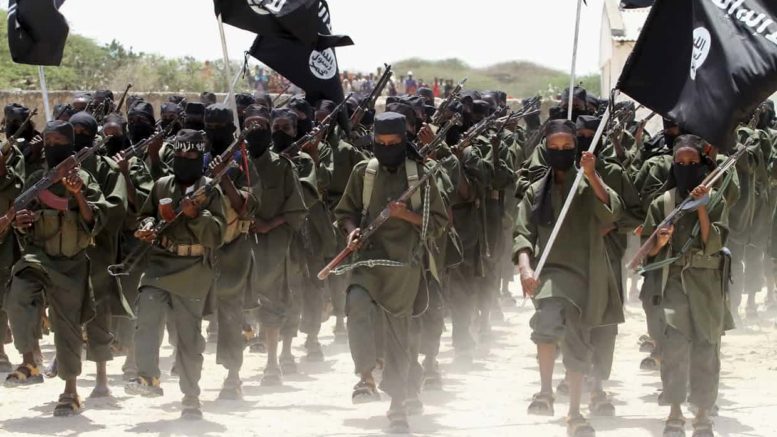 U.S. Department of the Treasury designated a network of al-Shabaab financial facilitators who hold leadership roles within al-Shabaab and act as key interlocutors between the group and local companies in Somalia.

This network has engaged in weapons procurement, financial facilitation, and recruitment activities for al-Shabaab. In addition to being leaders within al-Shabaab, these facilitators have had direct contact with other previously designated al-Shabaab officials. These individuals are being designated pursuant to Executive Order (E.O.) 13224, as amended, which targets terrorist groups and their supporters. Concurrent with Treasury’s designations, the U.S. Department of State designated five al-Shabaab leaders pursuant to E.O. 13224, as amended, for their leadership roles within al-Shabaab.

“Treasury is focused on identifying and disrupting al-Shabaab’sillicit networksoperating inEastern Africa,” said Under Secretary of the Treasury for Terrorism and Financial Intelligence Brian E. Nelson. “We will continueto take action againsttheweapons smugglingand fundraising activitiesofal-Shabaab and otheral-Qa’idaaffiliates.”

Al-Shabaab pledged allegiance to al-Qa’ida in 2009 and officially became an al-Qa’ida affiliate in 2012. The group maintains strong connections to al-Qa’ida’s senior leaders and coordinates its publication of propaganda with al-Qa’ida. Al-Qa’ida leadership has publicly praised al-Shabaab attacks in Somalia and Kenya in recent years.

Al-Shabaab has financed al-Qa’ida’s efforts worldwide, including by disbursing funding to support other al-Qa’ida-affiliated groups. Al-Shabaab generates around $100 million per year through multiple funding streams, including extortion of local businesses and individuals, collections of fees on goods, as well as the facilitation of illicit trades. The group’s revenue has also supported al-Shabaab’s capacity, capabilities, leadership, and attacks on Somali citizens. In the past, al-Shabaab has planned to sow further divisions between the Somali Federal Government and political opposition forces in Mogadishu, Somalia, in order to delay or prevent new federal elections.

Jeeri has served as an interlocutor between al-Shabaab and local businesses and has collected payments levied by the group. Jeeri is one of the serving members on the terrorist group’s leadership body, the Shura Council. He has also commanded a unit of al-Shabaab fighters and has overseen the consolidation of weapons and vehicles from various groups for al-Shabaab.

Jeeri is being designated pursuant to E.O. 13224, as amended, for having materially assisted, sponsored, or provided financial, material, or technological support for, or goods or services to or in support of, al-Shabaab.

As of early 2022, Khalif Adale (Adale) has served as al-Shabaab’s finance leader for collecting money from non-governmental organizations (NGOs) and has reported directly to al-Shabaab’s emir Ahmed Diriye, who was designated as a Specially Designated Global Terrorist (SDGT) pursuant to E.O.13224 in 2015.

Adale was part of al-Shabaab leader Mahad Karate’s team within the al-Shabaab organizational structure and maintained communication with Karate. The U.S. Department of State designated Karate as an SDGT on April10, 2015.

As of 2018, Adale had served as an al-Shabaab finance officer whose role included brokering business deals between al-Shabaab and legitimate businesses, handling higher-level payments imposed on businesses, acting as a clan liaison to settle disputes between clans, and recruiting for al-Shabaab.

In late 2017, al-Shabaab senior leaders, including Adale, arranged for approximately 600 fighters to be trained by al-Shabaab and paid for by members of a local clan. Al-Shabaab ultimately recruited up to 600 children between the ages of 10 to 15 from local villages for training to support future al-Shabaab operations.

Adale is being designated pursuant to E.O. 13224, as amended, for having materially assisted, sponsored, or provided financial, material, or technological support for, or goods or services to or in support of, al-Shabaab.

Rewards for Justice is offering a reward of up to $5 million for information on Hassan Afgooye (Afgooye), a key leader of al-Shabaab. Afgooye oversees a complex financial network, whose activities range from involvement in sham charities and fundraising to racketeering and kidnapping in support of al-Shabaab. Afgooye is considered critical to al-Shabaab’s continuing operations.

Afgooye is being designated pursuant to E.O. 13224, as amended, for having materially assisted, sponsored, or provided financial, material, or technological support for, or goods or services to or in support of, al-Shabaab.

Abdikarim Hussein Gagaale (Gagaale) has served as a deputy within al-Shabaab’s Finance Department under Mahad Karate.

Gagaale is being designated pursuant to E.O.13224, as amended, for having materially assisted, sponsored, or provided financial, material, or technological support for, or goods or services to or in support of, al-Shabaab.

Abdi Samad (Samad) is an al-Shabaab militant and has been in close contact with the al-Shabaab Senior Leadership Council. In 2010, al-Shabaab provided funding for Samad’s university degree, including travel and tuition expenses.

In 2018, Samad performed surveillance and conducted research on behalf of al-Shabaab.

Samad is being designated pursuant to E.O. 13224, as amended, for having materially assisted, sponsored, or provided financial, material, or technological support for, or goods or services to or in support of, al-Shabaab.

Abdirahman Nurey (Nurey) is an interlocutor between al-Shabaab and the local private sector. Nurey has securely stored, transferred, and laundered fiat and digital currency for al-Shabaab. Nurey has gathered financial transfers from al-Shabaab local finance officials to al-Shabaab finance leaders.

Nurey has facilitated al-Shabaab’s use of meeting space and has assisted in fundraising for al-Shabaab.

Nurey is being designated pursuant to E.O. 13224, as amended, for having materially assisted, sponsored, or provided financial, material, or technological support for, or goods or services to or in support of, al-Shabaab.

Mohamed Hussein Salad (Salad), Ahmed Hasan Ali Sulaiman Mataan (Mataan), and Mohamed Ali Badaas (Badaas) are part of an al-Shabaab smuggling and weapons trafficking network in Yemen. The network members have served as representatives for terrorists, criminals, and weapons dealers from Somalia, some of whom were middlemen.

As of early 2018, Salad received payment for a shipment of weapons for al-Shabaab that included 15 PK machine guns, about 80 AK-47s, and nearly a dozen boxes of grenades, ammunition, and military uniforms used by the Somali security forces. Al-Shabaab intended to use the uniforms to confuse people and facilitate entry into guarded installations. Mataan was the owner of the vessel used for the shipment.

Between 2017 and 2020, Mataan owned dhows — sailboats used for regional trade and capable of carrying heavy loads — that took supplies for al-Shabaab militants to Somalia. In 2017, Mataan and al-Shabaab reached an agreement to transport weapons, improvised explosive device (IED) equipment, and ammunition and small arms to Somalia. Mataan’s dhows were involved in transporting IED components to al-Shabaab that were used to make explosive devices used in the Soobe bomb attacks on October14, 2017, that claimed close to 400 lives and wounded hundreds. Mataan was a Somali businessman who primarily profited from trafficking weapons and facilitating criminal groups. Mataan operated a fleet of more than half a dozen boats and a single shipment paid approximately $15,000.

As of late 2021, al-Shabaab placed an order with Mataan for weapons and IED materials from Yemen. Mataan procured the weapons from a Yemeni weapons dealer and, in preparation for the shipment, a boat owned by Mataan arrived in Somalia to carry illegal seafood, including fish and lobster, to Yemen.

As of early 2022, a dhow owned by Mataan departed Yemen with a shipment of weapons intended for al-Shabaab members in central Somalia. Salad was involved with facilitating the weapons shipment to Somalia.

Mataan and Salad were business partners who jointly owned a boat used in a shipment for al­Shabaab. The shipment carried weapons, including AK-47s and shoulder-fired missiles, ammunition, and food and military uniforms typically worn by the Somali military.

Salad has also been in contact with at least two companies that engage in illegal, unreported, and unregulated (IUU) fishing. These companies were part of a forced labor fishing operation, and the contact with a prominent arms trafficker may provide a preliminary nexus between IUU fishing and arms trafficking networks.

Over the course of five years, Salad received more than $700,000 in remittances from Puntland-based arms importers. Salad is a key intermediary in facilitating the transport of arms consignments from Yemeni suppliers to Puntland purchasers.

As of late 2018, Salad owned a boat transporting a shipment of weapons, including AK-47s, hand grenades, pistols, ammunition, and materials for making IEDs, for the Islamic State of Iraq and the Levant branch in Somalia (ISIS-Somalia). The supplies for this shipment were purchased through Badaas. In mid-2019, Mataan also sold a weapons shipment to ISIS-Somalia.

Badaas is an al-Qa’ida in the Arabian Peninsula (AQAP) member and is part of an al-Shabaab smuggling and weapons trafficking network in Yemen. Badaas has facilitated a shipment of ammunition from Yemen for al-Shabaab militants.

As of 2017, Badaas was one of the most important AQAP commanders in the Shabwah region of Yemen. Badaas was responsible for monitoring personnel movements, smuggling operations, and managing AQAP members. Since at least 2015, Badaas has been a road guide for AQAP and facilitated travel for AQAP leaders throughout Shabwah, Yemen.

Salad, Mataan, and Badaas are being designated pursuant to E.O. 13224, as amended, for having materially assisted, sponsored, or provided financial, material, or technological support for, or goods or services to or in support of, al-Shabaab.

As a result of today’s action, all property and interests in property of the individuals named above, and of any entities that are owned, directly or indirectly, 50 percent or more by them, individually, or with other blocked persons, that are in the United States or in the possession or control of U.S. persons must be blocked and reported to OFAC. Unless authorized by a general or specific license issued by OFAC or otherwise exempt, OFAC’s regulations generally prohibit all transactions by U.S. persons or within the United States (including transactions transiting the United States) that involve any property or interests in property of designated or otherwise blocked persons.

Furthermore, engaging in certain transactions with the individuals designated today entails risk of secondary sanctions pursuant to E.O. 13224, as amended. Pursuant to this authority, OFAC can prohibit or impose strict conditions on the opening or maintaining in the United States of a correspondent account or a payable-through account of a foreign financial institution that knowingly conducts or facilitates any significant transaction, or provides significant financial services, for any SDGT.

The power and integrity of OFAC sanctions derive not only from OFAC’s ability to designate and add persons to the Specially Designated Nationals and Blocked Persons List (SDN List) but also from its willingness to remove persons from the SDN List consistent with the law. The ultimate goal of sanctions is not to punish but to bring about a positive change in behavior. For information concerning the process for seeking removal from an OFAC list, including the SDN List, please refer to OFAC’sFrequently Asked Question 897. For detailed information on the process to submit a request for removal from an OFAC sanctions list, please refer to OFAC’swebsite.