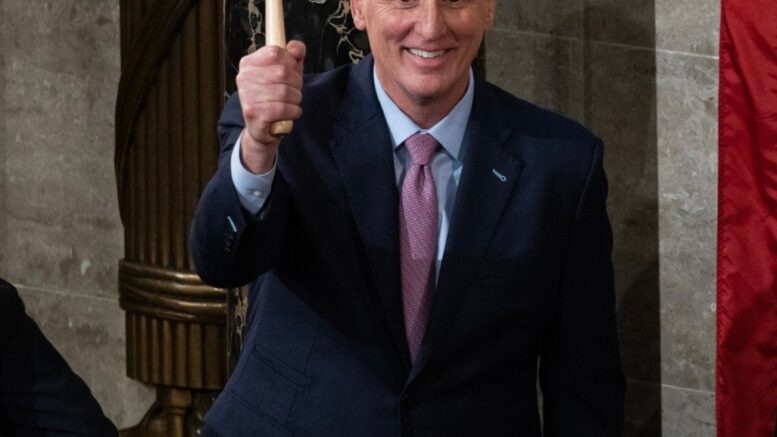 After 15 rounds of voting over five days and concessions to right-wing Republicans, California Congressman Kevin McCarthy was finally elected speaker of the U.S. House of Representatives on Saturday.

Late Friday, after the 14th ballot there was a move to adjourn the House until Monday, but that vote also failed after Republicans changed tactics and decided on a 15th effort to elect a new leader.

A band of 20 right-wing lawmakers had blocked McCarthy on previous ballots because they believe he is not conservative enough.

In an unusual confrontation, McCarthy had exchanged words with Republican Representative Matt Gaetz of Florida on the floor of the house chamber after the 14th ballot because the congressman had voted ‘Present’ instead of casting the vote that would have given McCarthy the speakership.

The Republican had never given any indication that he would drop out of the contest to lead the House, which would also, under a provision of the U.S. Constitution, make him second in the line of succession to the U.S. presidency.

The 57-year-old McCarthy had sought the speaker’s post for years. Over the past several weeks, he met repeatedly with his Republican foes to secure their support.

Senate Majority Leader Chuck Schumer, a Democrat warned, however, in a statement that “McCarthy’s dream job could turn into a nightmare for the American people.” Schumer said that for McCarthy to get the needed number of votes, “he surrendered to demands of a fringe element of the Republican party.”

Schumer said, “Kevin McCarthy’s concessions to the extremists in his party make it far more likely that the MAGA Republican controlled House will cause a government shutdown or a default with devastating consequences to our country.”

MAGA is short for Make America Great Again, a phrase associated with former President Donald Trump who has announced his intention to run for the presidency in 2024.

Republicans hold a slim 222-212 margin over Democrats in the new session of the 118th Congress, with one current vacancy.

Republicans who held up the election of the speaker said they wanted to reduce the power of the speaker’s office and give rank-and-file lawmakers more influence over the creation and passage of legislation.

McCarthy acceded to several of the right-wing lawmakers’ demands, including allowing a single member to call for a snap internal House election to vacate the speakership if they don’t approve of his legislative policies or the way he is overseeing the chamber.

He has also promised them key committee assignments and full House votes on some of their legislative priorities, such as imposing term limits on lawmakers and stronger border controls to curb undocumented migrants from entering the U.S. across the southwestern border with Mexico.

It has been 100 years since neither a Republican nor a Democrat won the House speakership on the first round of voting.

Electing a speaker in the House is the chamber’s first order of business as a new session of Congress opens. Without a speaker, the lawmakers, all newly elected or reelected in last November’s nationwide congressional elections, could not be sworn in.

After receiving the winning number of votes for the speakership, McCarthy swore in the 434 House members.

McCarthy replaces former House Speaker Nancy Pelosi, a Democrat, who remains a House member. She cast her votes for Congressman Hakeem Jeffries, the new Democratic minority leader in the House. All House Democrats voted for Jeffries on all the speakership ballots, but he had no chance of winning because no Republicans opted to vote for him to help him reach the 218 majority.

Democrats, who have been locked in a 50-50 split with Republicans in the Senate the past two years, gained an edge in the nationwide congressional elections nearly two months ago and will hold a 51-49 majority there, counting three independents who work with the Democrats.

New senators were sworn in on Tuesday.