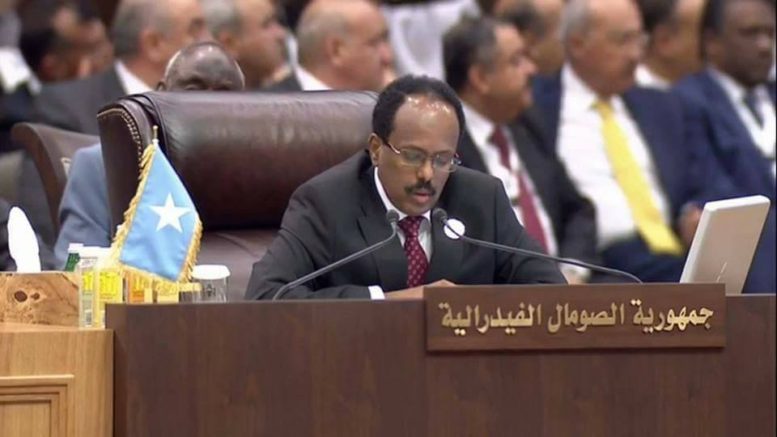 President of Federal Republic of Somalia H.E Mohamed Abduallahi Farmaajo, in a written speech distributed to the leaders of the Arab world attending at 28th Ordinary Summit of the Arab League, discussed Somalia’s progress, priorities and remaining challenges going forward.

The president acknowledged that most of the Arab world is currently facing grave challenges stemming from the threats of insecurity, political upheaval and economic distress. In light of this, the President called on Arab leaders to unite to overcome these challenges and galvanize wide ranging support to safeguard the future of the Arab world and its citizens.

“We need to unite our efforts to overcome these challenges and galvanize support for our people and safeguard our future…We call for immediate end to the fighting and violence in Iraq, Syria, Libya and Yemen.”

President Farmaajo spoke of Somalia’s democracy as a sign of the potential for reform and progress within the country and good news within the Arab League.
“Though there are many challenges in the Arab world, it’s not all gloom. We had peaceful, free and fair parliamentary and presidential elections in Somalia. That’s good news for a start,” said the President in his statement.

President Farmaajo advised Arab nations embroiled in conflicts to learn from Somalia’s experiences and acknowledge that the only viable solution to end the crises is to engage in dialogue.

The President acknowledged that Somalia is still facing enormous challenges, including a deadly drought that has led to and continues to lead to famine for many and the ever present and opportunistic and evil threat of international terrorism.
“The drought situation in Somalia has caused the death of millions of livestock, thus diminishing our strongest economic mainstay. More than 3 million people now face enormous risks, if immediate aid and support is not extended to them.’

The president said to mitigate the effects of the drought, there’s an immediate need to move quickly to alleviate hunger, as well as put in place mid-level and long term plans to find durable solutions.

“To overcome these challenges, we need to have realistic plans and unyielding support from our brothers and friends.”

The president also affirmed that terrorism has been the biggest threat to Somalia’s progress and stability for some time.

“Continuous terror attacks that cause ineffable loss of lives and destruction of property is the biggest affront to progress, stability and reconstruction in Somalia……terrorism has now become a fast growing tumor in almost all continents, unfortunately we had endured it longer than the rest. We call on the world to have a common position and unite efforts to combat the threat of terrorism.”