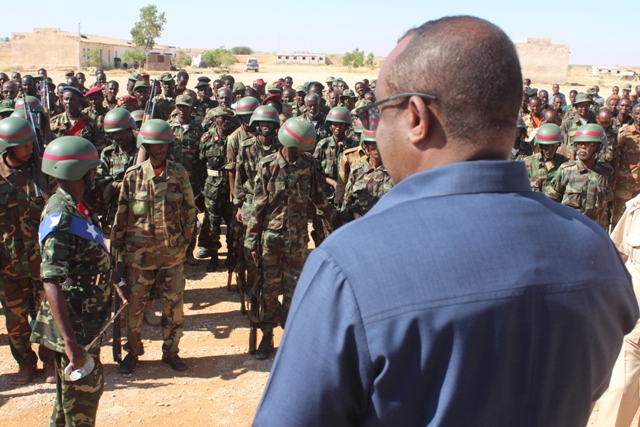 0
SHARES
ShareTweet
In a surprise move, Puntland President, Abdiweli Mohamed Ali known as Gaas told reporters on Friday that his government is aware of some of the business people in Puntland paying to tax to Al Shabab, while refuting the government tax.
Speaking on the taxation dispute, the Puntland president said that it was astonishing act to see business in the port town of Bosaso, refusing to pay tax, which is legal and been approved by the government.
President Gaas said that they are aware of business people sending money to Al Shabab through mobile money transfer in fear for their lives. He urged the people to pay the taxes to the government, which is even paid by the soldiers fighting against the enemy.
“The soldier who recieves 70 USD pays the tax, an a businessman is refusing to pay it” Puntland President, Abdiweli Gaas said, “That’s impossible, ensuring the security comes after tax payment.”
There are important projects going on in the town of Bosaso including building important roads and can not be successfully completed without the public support, Mr. Gaas added.
The dispute follows after the Shabab, a militant group affiliated to Alqaeda that control some parts of Central Somalia, warned against using the Somali shillings, which many believe to have been printed in Puntland. Puntand authorities blamed for the denial of the Somali Shillings to the Al Shabab. The towns affected by order include the regional capital of Hiiraan, where business from Bosaso is directly linked.
Many analysts believe that the Shabab are imposing indirect sanctions against the Puntland authorities, after its believed to have forced business community there not to pay tax to the government, while the group forced the people in Central Somalia not use Somali shillings which is believed to have been printed by the Puntland government.
Last week, some of the business people in Mogadishub speak out against the Shabab taxation, saying that they fear for their lives and need urgent protection, should they try to refuse the Shabab taxation. However, the Federal Government did not officially comment on the matter.