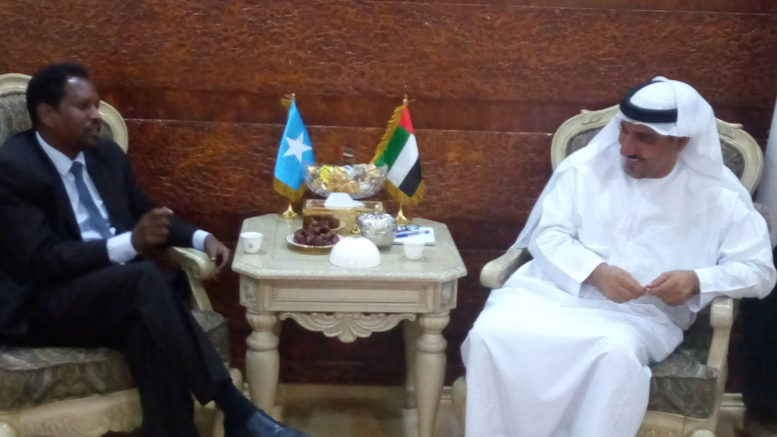 Mogadishu, 21 April 2017 – The Federal Government of Somalia has wholeheartedly thanked the government and the citizens of the United Arab Emirates, which has announced today, Friday that there will be live TV campaign in the UAE in which the citizens in the UAE will fund-rais for the drought in Somalia.

The Minister for Information of the Federal Government of Somalia H.E. Abdirahaman Omar Osman [Eng: Yarisow], has yesterday, Thursday had special meeting with the UAE ambassador to Somalia H.E. Mohamed Al-Othman, and thanked the constant support of the UAE to the Somali government and its citizens, and in particular the live TV campaign on today 21st of April for the plan to collect contribution money for the drought in Somalia, the live TV campaign contribution program will be live as from 1:00pm to 7:00pm.

“Somalia won’t forget anybody who has come to its rescue at this tense time when the Somali population is facing biting drought, which is feared will lead to famine in the country. We candidly thank the UAE which is dynamically directly involved in helping the needy Somali citizens, and as well labeling today, Friday the 21st of April 2017 as a day when there will be live TV fund raising campaign for the drought affected Somali people, and an estimation of 100 million dinars will be collected.” Said Eng. Yarisow

The Minister for Information has finally appealed from the Somali citizens who have been vivacious taking part in the drought rescue mission to redouble their efforts, and intensify the fund-raising campaign by the UAE

The END
The Ministry of Information and Public awareness