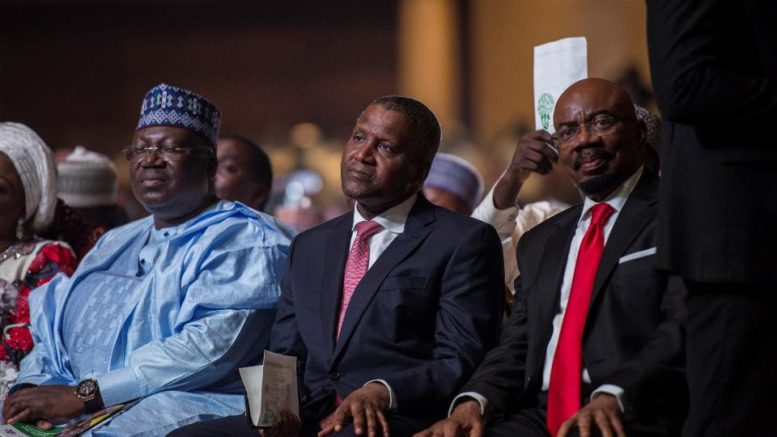 0
SHARES
ShareTweet
According to reports by the Addis Standard, Reuters and several other Ethiopian news outlets, Kamara was shot dead on Wednesday afternoon by unknown assailants near the Dangote Cement Factory located some 85 kilometers west of Addis Ababa in Adeberga woreda, in the Oromiya region. Two other employees of Dangote Cement, a secretary and the driver of the country manager who were driving with Kamara, were also reportedly shot dead.
Ethiopia’s law enforcement agencies are yet to identify the assailants.
Nigerian businessman Aliko Dangote (C) listens to a speech as he attends the rally organized to celebrate the 66th birthday of the leader of the All Progressive Congress (APC) Asiwaju Bola Tinubu, in Lagos, on March 29, 2018. Photo credit should read STEFAN HEUNIS/AFP/Getty Images)
Today’s assassinations might be an indication that all is not well with Dangote’s operations in Ethiopia.
Aliko Dangote, Africa’s richest man, has had a turbulent adventure in Ethiopia. In 2016, during the infamous wave of protests by the Oromiya people, protesters attacked and vandalized Dangote’s cement factory along with several vehicles and machinery. There have also been a series of other attacks from the local community on Dangote’s assets over some unresolved labor issues related to the private employment agencies hired by the company.
Last year, Dangote threatened to shut its operations in Ethiopia if the authorities in Oromiya did not reverse an order to cement makers to deliver control of some parts of their businesses to local young people.
Carl Franklin, a spokesperson for the Dangote Group did not respond to a request for comment at the time of filing this report.