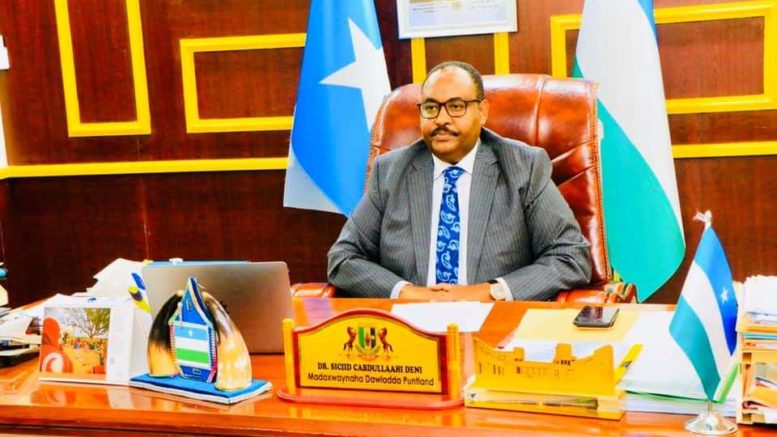 Puntland has been mired by corruption, nepotism, and poor governance spearheaded by successive incompetent president that misused scarce resources the State desperately needed to function properly.

After 22 years of its establishment, Puntland is incapable to enforce laws uniformly across the State and provide basic services to its citizens.

There are many factors contributing to Puntland’s deteriorating situation including, in addition to the above mentioned factors , increasing crime rates in the big cities, constant terrorist attacks, poorly and incompetent security leadership selected by their kinship to the State leaders instead of their quality, sense of second citizenship experienced by many, lack of political innovation and repetition of failed policies and pursuit of individual and clan interests, mock judicial system, and clan competition for power and resources which resulted in traditional leaders to wield more power than the State leaders.

Although Puntland administrations rarely takes against serious crimes and killings, the regional administration strategic policies have been steadily declining day after day. Insecurity went up to highest level as the State has been facing major terrorist attacks in recent years.

Many people in different capacities have been killed by unknown gunmen including governors, civil servants, security forces, and aid workers.

Security was one of the three main pillars behind the establishment of Puntland administration in 1998 and less realized.

The fading security the State has been experiencing for the last of few years is partly attributed to lack of relationship and collaboration between law enforcement and the people.

Furthermore, the stained relationship can be explained by poorly trained police officers who lack necessary skills and the training get hearts and minds of the people. Instead of having good relationship with the people, the police and other security agencies engage aggressive policy when they are dealing with the people.

Al-Shabaab took advantage of flawed security and continuously carries out deadly attack against government officials and the security forces.

According to the key informants, the president and vice president don’t work together effectively. Prior to that, the President bribed members of the parliament to remove former house speaker Abdihakin Dhobadareed, a decent man who had been MP since 2009.

President Den appointed his campaign donors for high profile positions such as ministers and advisors. However, according to people familiar with this matter, as a return from their investment, they awarded themselves huge contracts.

For example, a ministry of Security and DDR official had said “they haven’t paid my salary for almost 5 months.” Gaalkacyo city workers and council members had been attacked and killed by unknown gunmen.Key figures who lost their lives include governor Abdizalam’Gujir’’ and governor of Mudug Ahmed Muse, city council Mukhtar Ahmed Omer and many others.

Al-shabab claimed most of the killings and suicide attacks. Bosaso, the commercial city of Puntland has been facing security challenges, security agencies has no control over what is going on in Bosaso.

Al-shabab and other terror groups operate freely and collect taxes from the city. Few years back, Galkayo elders travelled to southern Somalia’s city of Jamaame to negotiate with l-Shabab about the scuriyt of the city since Puntland had failed to protect them from attacks from Al-Shabaab, they agreed to pay taxes to Alshabab.

The (Puntland) administration should come up with a strategic way to fight Al-Shabab, and train, and equip Puntland Police and intelligence agencies. It is important for Puntland to secure international assistance and local support to be able to make significant progress in the security sector.

The administration to move from its reliance on clan militia and select and train young high school and college graduates and provide allocate decent salary and other benefits.

This requires great effort and sacrifice such as fighting corruption and nepotism and building people’s trust in the government.