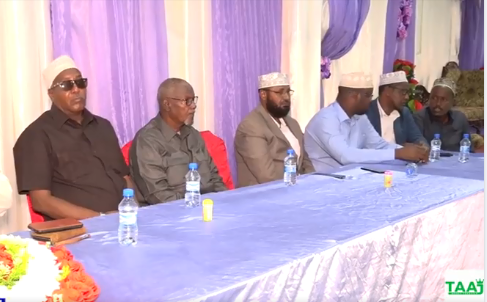 More than a thousand delegates representing Hawiye clans held a oneday conference on 5 January at Hotel Afrik. The conference participants deliberated at length on many issues, including the lack of representation of the Banadir Region, rampant insecurity in the country, lack of a just judicial system, violations within the armed forces and civil servants and political instability and insecurity due to the dispute over the election. After lengthy debates, the following points were agreed:

1- The Conference agreed that the Hawiye clans reconcile and unite for their interest and the interest of the country and their religion.

2- The Conference agreed to immediately establish a Hawiye Council of Elders with executive powers. The Council would give guidance on critical issues affecting the Hawiye Clan.

1- The Conference resolves that in order to avert the country from sliding into political instability and insecurity, agreed upon and timely electionS should be held.

2- The Conference urges that all the concerned political stakeholders should be included in the process of resolving the election deadlock, including the Federal Government, Federal Member States, Presidential Candidates and the Civil Society in order to achieve an agreed upon and timely elections

1- The Conference warns the president of the federal government against the consequences of discriminating against and marginalizing members and commanders of the armed forces who hail from the Hawiye Clan. There has been mounting evidence that members and commanders of the security forces from the clan have been unfairly targeted through arrests, dismissals, pay cuts and lack of promotions.

2- The Conference warns all units of the Somali armed forces to distance themselves from involvement in political activities and fulfill their constitutional, national duty

1- The Conference warns against provocations and harassment of politicians from the clan, especially the presidential candidates.

2- The Conference demands the implementation and protection of the country’s constitution. Article 20 of the constitution stipulates that political meetings can be organised and peaceful demonstrations can be participated in without the requirement of permission from anyone. Therefore, the Federal Government must stop obstructing political meetings and peaceful demonstrations.

3- The Conference condemns the horrific act where Somali civilians were shot at during a peaceful demonstration in Mogadishu, and demands that the soldier who fired at the civilians (female protesters) be immediately brought to justice.

4- The Conference condemns the oppression of the Banadir taxpayers who are suffering from increased insecurity, whose roads are constantly closed and cannot find roads to use to take their pregnant women to hospital and bury their dead.

1- The Hawiye Clan calls on the other Somali Clans to come together in a reconciliation conference in order to deliberate on the destiny of the country; the Hawiye Clan will host the conference.

2- The Conference calls for the establishment of a National Council to run the country during the transition period, in the event that a political solution is not reached prior to the end of the term of office of the current government.

3- The Conference calls on the Federal Government of Somalia to end the incitement and violence that it is instigating in Hiran region.

Allah is the Grantor of success!