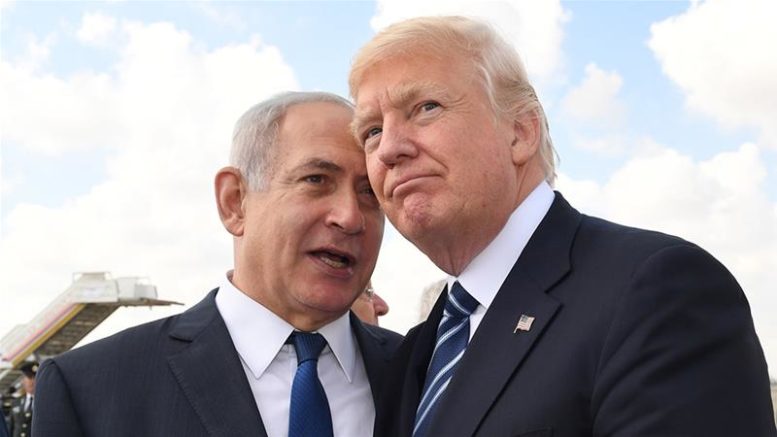 United States President Donald Trump is expected to release soon his long-awaited Middle East peace plan  – more than two years after his administration began drafting its vision for a solution to the Israeli-Palestinian conflict.

The policy proposal has been delayed multiple times and has been kept largely under wraps.

Here is what we know so far:

Trump said he will likely release details of his plan before holding separate meetings at the White House on Monday with Israel’s Prime Minister Benjamin Netanyahu and his rival in upcoming Israeli elections, Benny Gantz. The Palestinian leadership, which has rejected the proposal before it is even released, was not invited to Washington.

“It’s a great plan. It’s a plan that really would work,” Trump told reporters on Air Force One.

“I love doing deals,” he said.

The plan would be rolled out as Trump’s Senate impeachment trial continues on Capitol Hill and as Netanyahu seeks parliamentary immunity from prosecution in corruption cases. Both leaders also face re-elections: Israelis are due back in the polls on March 2 and Trump is gearing up for the US presidential election on November 3.

The US has tried to release the plan multiple times before, but Israel has been engulfed in a political crisis after Netanyahu failed to form a majority government twice last year, creating uncertainty over who will be in charge to negotiate a peace deal.

“There have been several false starts by the US administration in the unveiling of a plan that has been ready for some time now,” said Lucy Kurtzer-Ellenbogen, the director of the Israeli-Palestinian Conflict Program at the United States Institute of Peace.

“Some think that the administration is running out of patience waiting for Israeli elections that may yet again not be conclusive,” Kurtzer-Ellenbogen told Al Jazeera.

Observers say by inviting both leading candidates, the US may be hoping to get Israel’s next prime minister on board in advance.

The Palestinians have already dismissed “the deal of the century,” as the peace plan is widely dubbed, saying it will likely be heavily tilted in Israel’s favour – like several other steps taken by Trump since taking office in January 2017.

Over the past three years, the Trump administration has controversially recognised Jerusalem as Israel’s capital and relocated the US embassy there from Tel Aviv; reversed decades of US policy by refraining from endorsing a two-state solution; announced that it no longer views Israeli settlements in occupied territory as “inconsistent with international law”; stopped funding the United Nations‘ Palestinian refugee agency UNRWA; and slashed hundreds of millions of dollars of aid to Palestinians, among other steps.

The Palestinian Authority (PA) cut off all talks with Washington since the first of these moves, and a spokesman for PA President Mahmoud Abbas said this week that the Palestinian leadership had a “clear and unwavering position” to reject any Trump-led initiatives.

In a Twitter post, Saeb Erekat, the secretary general of the Palestine Liberation Organization, said any proposal that ignored Palestinian rights would be “recorded in history as the fraud of the century”.

Reminder to the International Community:Israel is an Occupying Power of the State of Palestine on the 1967 borders ( East Jerusalem , West Bank and GazaStrip ).Any deal, attempt or dictation that ignores this fact, will be recorded in history as the Fraud of the century9512:48 PM – Jan 24, 2020Twitter Ads info and privacy228 people are talking about this

Trump said his administration has talked “briefly” to the Palestinians.

“But we will speak to them in a period of time,” he added. “And they have a lot of incentive to do it. I’m sure they maybe will react negatively at first, but it’s actually very positive to them.”

“We took away their money,” Trump added. “That’s a lot of money for them.”

Jordanian protesters take part in a protest against the “deal of the century”, after Friday prayers in Amman, Jordan, with banners reading “Down with the agreement of humiliation and shame” and “Jerusalem supports whoever supports it” [File: Muhammad Hamed/Reuters]

Israeli-Palestinian peace talks collapsed in 2014, and Palestinians say the policies of the Trump administration have rendered Washington incapable of being an honest broker in any future negotiations.

“This peace plan is a euphemism,” said Noura Erakat, a human rights lawyer and assistant professor at Rutgers University. “There is no peace involved in it.”

The economic portion of the veiled plan was published on June 22, just before its presentation in a gathering in Bahrain, which was boycotted by the Palestinian leadership.

Trump’s son-in-law and senior adviser Jared Kushner proposed a $50bn investment fund during a two-day workshop called Peace to Prosperity aimed at boosting the Palestinian and neighbouring Arab economies, arguing that this approach could generate prosperity in the occupied Palestinian territories, and Jordan, Egypt and Lebanon.

Jared Kushner speaking at the Peace to Prosperity conference in Manama, Bahrain [File: Handout via Reuters]

The plan included infrastructure, business and tourism projects as well as the construction of a travel corridor in Israel that would link the West Bank and Gaza Strip with a highway.

Israeli government officials did not attend the event in Manama while several Arab states stayed away or sent low-level delegations.

Contents of the plan

The development of the peace plan began in November 2017 by a Kushner-led team of advisers and officials including chief negotiator Jason Greenblatt, Deputy National Security Adviser Dina Powell and Ambassador to Israel David Friedman.

The plan is reportedly dozens of pages long, but its political outlines remain a closely guarded secret.

Kushner said the peace proposal will not include the phrase “two-state solution”. Previous US administrations oversaw the peace process between the two sides based on the two-state solution, which sees a Palestinian state established within the June 4, 1967 borders with East Jerusalem as its capital.

US Ambassador to Israel David Friedman and White House Mideast envoy Jason Greenblatt attending the opening of an ancient road in the occupied East Palestinian neighbourhood of Silwan [File: Tsafrir Abayov/Pool via Reuters]

“We said, ‘You know, let’s just not say it. Let’s just say, let’s work on the details of what this means.'”

In an interview with the Times of Israel in 2018, Greenblatt said: “It will include a resolution to all of the core issues, including the refugee issue, and will also focus on Israel’s security concerns.” In fact, he added, the proposal will “be heavily focused on Israeli security needs”.

“But we also want to be fair to the Palestinians. We have tried hard to find a good balance. Each side will find things in this plan that they don’t like. There are no perfect solutions.”

Palestinians fear that the plan seeks to use economic incentives to bribe them into accepting Israeli occupation, in what could be an Israeli aim to annex the majority of the West Bank and most of the Jordan Valley, a strategic and fertile strip of territory.

It remains unknown what effect the announcement will have, and what will follow. It is also unclear if the plan will garner any international support. The UN and most of the international community have long supported a negotiated two-state solution as the basis of any peace plan in the region.

“There are some in the White House who genuinely believe that there is enough in this plan that might make the Palestinian side think twice and after reading it and might say, ‘We don’t like it but let’s talk’,” said Hady Amr, former deputy special envoy for the Israeli-Palestinian conflict under the administration of Trump’s predecessor, Barack Obama.

“We don’t know exactly what is going to happen, but we do know that they have something rigorous that has been written up,” Amr told Al Jazeera.

“It will not answer every question, but it will answer a number of questions.”