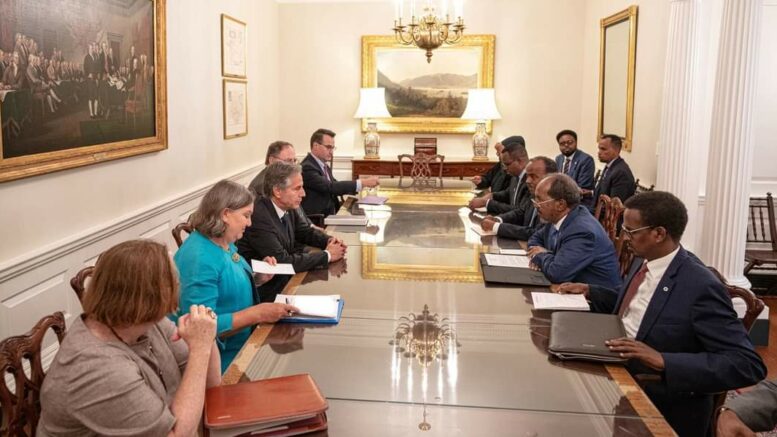 Assistant to the President for National Security Affairs Jake Sullivan hosted President Hassan Sheikh Mohamud for a meeting at the White House today to reinforce the strong partnership between the United States and Somalia.

Mr. Sullivan, joined by Assistant to the President for Homeland Security Dr. Elizabeth Sherwood-Randall, praised Somalia’s leadership in its work to build a national consensus and counter the al-Shabaab terrorist threat.  President Hassan Sheikh thanked the United States for the ongoing military and civilian partnership to build a stronger, more stable, and  more peaceful Somalia.

Mr. Sullivan and President Hassan Sheikh discussed the importance of political reconciliation in Somalia, particularly the renewed coordination between the Federal Government of Somalia and Federal Member States to improve governance, law enforcement, service delivery, and security for the Somali people.

They expressed concern over the devastating Horn of Africa drought, which is impacting Somalis most acutely, and emphasized the urgent need for additional humanitarian aid.  U.S. funding to address drought in Somalia is more than $706 million this fiscal year alone, representing more than half of all humanitarian funding to Somalia.

Mr. Sullivan and President Hassan Sheikh underscored the close friendship and cooperation between the United States and Somalia and expressed commitment to reinforce our joint efforts in strengthening Somalia’s capabilities to counter al-Shabaab and build a future that meets the needs of the Somali people.